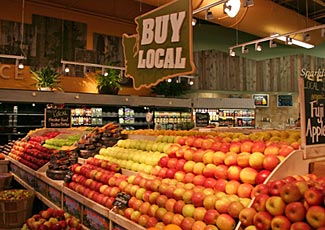 The sign says ‘buy local’ but even if these ‘fresh’ apples are local, they have probably still been sitting in a cool store for many months before being shipped to the supermarket.

One of the issues we as preppers instinctively accept and understand but struggle to explain to non-preppers, is the huge degree of fragility and multiple dependent layers upon which today’s society is built.

Exactly like a house of cards, if a single component in any of the dependencies fails, the entire structure is at risk of colossal failure in a manner that would not have been possible 50 or 100 years ago.

The problem we have in explaining these dependencies is that many of them are obscured and not at all intuitively obvious.

Here’s an interesting example of a surprising statistic and dependency.  70% of the food we eat passes through or is dependent on the ‘cold chain’ – refrigeration is needed as part of its processing, storage, and distribution.

Some of this we know about already.  It is unsurprising to learn that the milk we drink and the meat we eat has been chilled pretty much through its entire history from the minute it was first obtained.

Some other things are less obvious, but if we think about it, we’re not very surprised.  Look in the produce section of your supermarket, and although you’ll see things like potatoes and onions in bags or loose, displayed at room temperature, we might realize that they’ve been sitting in cool stores for months between when they came out of the ground and were put on display in the supermarket.

Oh – and of the potatoes we eat (the average American eats 36 lbs a year), most are not just kept chilled/cool, but are actually hard frozen.  Astonishingly, 29 of the 36 pounds of potatoes we eat are in the form of frozen French fries.  Who’d a thought?

The same is true of fruit as well.  Apples, oranges, etc – all these things are kept in special temperature environments – indeed, not just the temperature is managed to a very exacting degree, but so too is the humidity and even the gas mix surrounding the fruit.

But how about things as unobvious as, for example, even peanuts?  Yes, they too are kept in cool storage to extend their shelf life.

Our point is simply this.  A power failure – even a power shortage – would threaten 70% of our food supplies.  Without refrigeration, we’d have two problems.  The first is that we’d no longer be able to harvest food when it was plentiful, inexpensive, and in season, then store it for future sale/consumption some months later.  This would make for a crazy situation with some months having enormous gluts of food products and other months having nothing at all.

The second is that without refrigeration, we’d no longer be able to have vast distances separating where our food is grown and where it is eaten.  At present food travels at times almost literally half way around the world to reach our supermarkets.  If we had to rely on food grown within a day or two of our homes, that would destroy the viability of many major cities because the amount of food growing area needed to support the millions of people in the urban concentrations would stretch out impossibly far.

Anyway, food for thought, as it were. 🙂

More details in this rather pompous article and this very incomplete web site.

13 Responses to “70% of All Our Food Relies on Refrigeration”