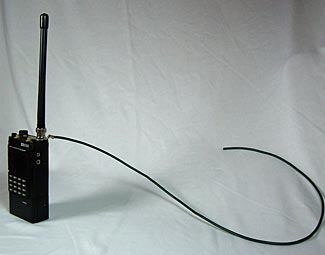 Adding a simple piece of wire to your walkie-talkie could double its range.

Some things in life you can never have too much of.  But for this article, we’ll concentrate just on radio range/efficiency!

There are many ways to boost the range of your two-way radios.  We write about this topic regularly (please see our complete section on communication related topics to access these articles) and basically, the suggestions we offer fall into one of two categories – either getting a more powerful radio transmitter and more sensitive radio receiver, or boosting the effectiveness of your antenna.

Between these two choices, improving the effectiveness of your antenna is always the better approach.  More powerful transmitters and more sensitive receivers are, of course, more expensive than standard grade units, and a more powerful transmitter is also going to need much more power to operate – chewing through batteries maybe ten times faster, and/or becoming a power-hog when you’re off-grid and power is precious and limited.

One more important issue – the more powerful your signal, the further it goes, and the greater the number of people who might receive it.  This is seldom a good thing, particularly when you are trying to keep a low profile.

This is why our focus is not just on greater transmitting power, but also on better overall efficiency of the antenna so it can receive weaker signals more clearly, and – with our radios – if we improve our antenna, we often then cut back on our transmit power, keeping it at the minimum needed for the range we require.

Enough introduction.  By now, you’re probably keen to understand the 10¢ device and how it can double your radio range.  Actually, we may have misstated the truth – the device might cost you less than 10¢!

How a Piece of Wire Can Double Your Radio Range

This device is simply a piece of wire which dangles down off your hand-held radio transceiver.  That sounds too good to be true, doesn’t it, and a bit like the ‘patch’ devices that used to be sold to gullible fools to add to their cell phones, with claims either that they would magically filter out harmful radiation or boost the phone’s range or something.

But we’re not trying to sell you anything, and there is actual solid radio theory that readily explains how and why this works as it does.  And, most of all, you will actually perceive the great boost to your radio’s signal yourself – you will know if it works or doesn’t work.

Without going too much into the theory, but also giving you enough to understand that this is a bona fide scientific real thing, most antennas need two parts in order to work properly.  Sometimes the two parts are obscured as part of a single overall antenna structure, but any good antenna definitely does have two parts to it.

However, with a hand-held transceiver (HT) the people who design them have pretty much unanimously decided that people prefer small portable robust units rather than larger, bulkier, and more fragile units.  They have taken that perception and used it to justify making the antennas small and inadequate.  They know the antenna is inefficient, but it is also small and strong, and they feel that is more important to most people, most of the time, than is a bulkier more fragile antenna but with better range (and with removable/replaceable antennas, if you do want/need a better antenna, you can simply buy one, as most of us do).

The manufacturers are probably correct in their assumption, and most of the time, we accept the limited performance we get from our HT antennas – but sometimes we need better performance, and that’s what this article is all about.

We explain this so you understand the answer to the question ‘If this is so great, how come it isn’t already being offered on all radios?’.

To be more technically precise, the antenna on most hand-helds is typically some type of quarter-wave monopole radiator, usually inductively loaded to shorten its physical length while preserving its electrical length, most commonly a normal-mode helix.  Adding this extra piece of wire changes it to a half-wave dipole.

You already know that the first thing you should do with any HT is to replace its standard ‘rubber ducky’ stub antenna with a better antenna, with ‘better’ being in part synonymous with longer/bigger.  See our two-part article about adding an external antenna to your HT, and if you have one of the lovely little Baofeng UV-5R

But even these improved antennas are still massively inadequate because they don’t provide some type of radiating element for both halves of the antenna.  Instead, the radio designers use various compromises in their design that basically end up as using your body as the other (‘ground’) half of the antenna system.  You’ll be unsurprised to learn that the human body, while wonderful in many ways, is not very good at doing double duty as a radio antenna!

So, to address this limitation, you can add the missing other half of the antenna to the radio yourself.  All it needs to be is a specific length of ordinary wire (bell wire or phone wire, ideally multi-strand so it is flexible, and insulated).  For 2M, this would be about 19.5″, for 1.25M, it would be 11.5″, and for 70cm, it would be about 6.5″.

For best results, you want to strip the insulation off a short piece of the wire and then connect the exposed wire to the ‘ground’ or outside part of the antenna connector.  This is very easily done with the Baofeng units – just unscrew the antenna sufficiently to be able to poke in the wire then screw down the antenna again to secure it.  It might help if you break off/file down/drill a bit off the side of the plastic shroud surrounding the antenna mounting screw, making it easier to get the wire in and firmly clamped by then antenna.

You can also use various types of washers or electrical clamps and connectors to create a connection too, depending on how much work you want to put into this enhancement.

Once you have connected your wire, just let it hang down freely while using the HT.  Don’t grip the wire when holding the HT, but let the wire hang down separately.

When the radio is not in use, you can wind the wire around the set or do whatever else you like to store it conveniently.

What Sort of Improvement Will You Get?

You will notice a significant improvement in both transmitting and receiving on 2M, some improvement on 1.25M, and much less improvement on 70cm.  We’ll spare you the antenna theory issues as to why this is.  🙂

But on 2M, you can expect your signal strength to increase by perhaps 6dB.  Some hams report as much as a 9dB improvement, but we find that improbable.  A 6dB improvement is the same as increasing your transmitting power four-fold, so it is a huge/massive improvement, and truly could double your range – or could now allow you to reduce your transmitting power while still getting a signal out as far as before, and getting a greatly improved receive signal.

Now for an interesting extra point.  Not only do you not always need to boost your transmit and receive capabilities, but sometimes this can be inappropriate.  Sure, you can maybe offset a more efficient antenna by reducing your transmit power, but if you are already receiving very strong incoming signals, and particularly if you have some unwanted signals on nearby frequencies, boosting the signal from the antenna to the receiver can sometimes cause problems.  If you find, after adding this extra wire to your HT, that it actually receives more poorly than before, even though it is transmitting better, you have a problem with your receiver circuitry being de-sensitized by strong adjacent signals, and in such a case, you should stop boosting your antenna.

For this reason, there is another way you could conveniently control your antenna, making it easier to selectively add or remove the extra wire.  Have just a short lug connected to the antenna ‘ground’ base on the HT, and protruding slightly from the radio.  Then if you need a boost in capabilities, you can conveniently clip whichever antenna you want onto the radio, but if your receiver is being overloaded, you can unclip it again without any great hassle or bother.

Some Extra Tips and Suggestions

Note that the connection needs to be electrical, not just physical.  There are easy and complex ways of doing this – the easiest is stripping a bit of insulation off the end of the 6.5″ wire and off one end of the two extender wires, then simply twisting the two together.  Slightly more elegant would be to have an alligator clip on the extender wire, and more elegant still would be to have a paired socket and plug connector at the end of each wire.

Second, you don’t actually need to have your antenna wire physically connected to the ground of the main antenna at all.

You will get best results if it is connected, but if that is difficult – or if it is impossible, for example, with a radio that has a fixed antenna that you can’t unscrew to access its ground – you can create a capacitive coupling between the radio and your antenna, by simply terminating your wire in a metal path (tin foil or copper or whatever) and affixing the patch somewhere on the radio.  The bigger the patch size, the better, and some locations will work better than others.  Some trial and error experimentation might be called for to work out the best place to place the patch.

Of course you could also open up the radio casing and hard wire/solder the wire to a ground point on the radio’s circuit board or access the antenna’s connector internally, then have the wire coming out through a hole in the case, and that would be slightly better than the capacitive coupled device, but is more hassle.

Lastly, if you’re still not convinced about how a simple piece of wire can add so amazingly to your radio’s range, Google ‘tiger tail antenna’ to see many credible articles confirming it works.  But, really, you don’t need to do this, because it only costs you 10¢ and only takes you five minutes to do it yourself.  You’ll hear the difference, as will the people you’re communicating with.

And surely that’s what counts.