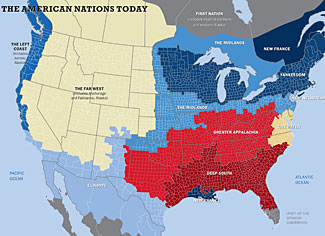 The eleven different sub-nations within the US. Click image for a larger image.

One of the fictions foisted on us in the name of greater federal government is that the US is a collection of 50 similar states, and that national/federal laws of a ‘one size fits all’ are both appropriate and necessary.

The reality is very different.  Indeed, there are massive social discontinuities within single states, let alone across all 48 lower states, plus Alaska and Hawaii (which still seems to half regret having joined the rest of us).

I travel some around the western part of our great nation, and it always strikes me that not only are there huge differences between, for example, CA and its neighbors, OR, NV and AZ, but also with each state.  In California we have the Mexican dominated south, the formerly hippy and now high-tech Bay area, but also, if you go inland, there are some conservative counties with gun friendly policies, including some where the county sheriff is happy to issue concealed carry permits to anyone who asks.

In WA, the state is fractured by the Cascades – a very liberal western group of counties, and a much more conservative eastern group of counties, who feel terribly disenfranchised.  Political matters are decided in the left-wing metroplex stretching from Bellingham down to Olympia, leaving the greater part of the state – geographically but not economically or demographically – out in the cold (quite literally so in the winters!).

These disruptions within our nation and within individual states come as no surprise to us.  We see it every presidential election, for example, and we consider it painstakingly if we are choosing where to locate a retreat.  It is reflected in the repeated and unlikely to ever succeed moves to split states into two, or to blend parts of two states and make them into three or more new states.  Most recently, in late 2014, a petition for a ballot measure in California to split the state into six separate states narrowly failed to gain enough signatures.

A recent article in the Tufts University Alumni magazine suggests that the US as a whole can be segmented into 11 different clustered subgroups, with each subgroup sharing generally similar values and views.  The article includes a fascinating map showing, county-by-county, where the groupings are.  We could point out that even some counties are far from uniform in nature, but for the purposes of a general vague mapping of these different value groupings, that is probably as close as one can get – leastways, without a multi-million dollar federal grant to research it further!

The most interesting point, for me, was that the increased mobility of our population was actually making these groupings more extreme, rather than mixing everyone up more.  Because it is easier to relocate these days than it was in the past, people are choosing to relocate to areas with like-minded folk, and when you think about it, that’s one of the core concepts in choosing a retreat location.

The area of greatest interest to us is essentially an extension of the region sometimes referred to as the American Redoubt, and in this article, termed ‘The Far West’.  Of course, the article did not adjust its regions for considerations of how best to survive TEOTWAWKI, so for us, their Far West region is a starting point to then refine and narrow down.

The author’s point is not so much to show and map these different regions, but to consider the implications of their existence.  He says that as long as there is such a pronounced lack of homogeneity in our country, it is difficult for consensus driven federal government to effectively address the often opposite wishes of different parts of the country.

Think for example about abortion.  That’s something most people have an opinion on, and it is pretty much an either/or issue – you’re either for or against ‘a woman’s right to choose’/’the rights of an unborn child’.  There’s not really a compromise that could be created that works for everyone in the nation.

The same for gun control, and for all manner of other moral and value related issues.

Unfortunately, the author uses his findings as a base for a long discourse on violence and, by implication, how it should be controlled, but for our purposes, simply look at the map, read the descriptions of the eleven different regions, and then follow the national trend – relocate to the region that feels most like ‘home’ to you.

Chances are, when you do, you’ll find us already there!

3 Responses to “The (Not Very) United States”