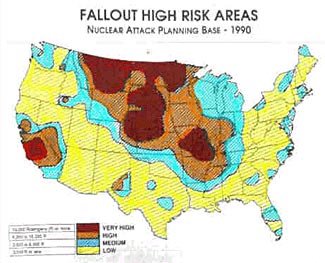 This is the second part of a two-part article about how close you can be to a nuclear explosion and survive.  If you arrived direct to this page from a search engine or link, we suggest you first read the first part which talks about the immediate effects and dangers of a nuclear blast (covering the first five minutes or so) and how close you can be and still survive those.

Once you have survived the immediate effects of a nuclear blast – the fireball, the flash, the heat, the radiation, the blast wave and the flying debris, you have no time to relax.  There are two more dangers still to consider.

The first danger is that this first nuclear blast may not be the only one.  In a full-out nuclear war, all significant targets will likely be targeted to receive multiple bombs.  We’d suggest that if a first blast occurs, you anticipate that additional blasts may follow, and potentially over a period of an hour or two.  There could be several blasts within ten to twenty minutes from the first wave of missile attacks, and then there might be a second wave of attacks that follow an hour or so later.  Assuming you are in a moderately appropriate place to shelter, stay there for an hour or two in case of additional bombings.

Unhappily, the concern about additional bombs following the first is only one of the reasons to stay sheltered (or to urgently get to shelter).  There’s another major factor that will start to come into play, about 30 minutes after the explosion.

The Danger of Fallout

This is where some type of shelter facility becomes essential.  The bad news part of the immediate effects of a nuclear blast is that you might not have a chance to get to your shelter in time to be protected from them; the good news part is that they are lethal only over a surprisingly short distance (see the first part of this article for a discussion on the range of the lethal initial effects of a bomb blast).

But the fallout from the blast may start arriving at your location as soon as a few minutes after the blast, and might continue arriving for hours or even days afterwards, depending on issues such as wind and rain (see our series on Using Wind Data to Estimate Fallout Risk).

You have two problems with fallout.  Firstly, you don’t want it falling on you or getting in to your retreat/shelter.  Secondly, it will remain ‘out there’ – on the ground, on exposed surfaces, and anywhere/everywhere dust can settle – for a very long time until either washed away, removed, or radioactive levels subside.

Even though the radiation levels from the fallout may be low, they will be continuous and the effects on your health will be cumulative.  Controlling your exposure to fallout radiation is essential.

We talk about fallout in detail on our page Radiation and Fallout Risks.

There is a new concept to introduce to you now – and that is the difference between early and delayed fallout.

Depending on the particle sizes of the fallout material, some fallout will rise further than other fallout.  The heavier pieces go up a shorter distance and come down more quickly – this is termed early fallout.  The lighter pieces will go further up into the atmosphere – some objects may even be shot out into space, happily never to return.  The lighter pieces may get caught up in the jetstreams and be whisked away from where you are.

The immediate problem for you, if you are reasonably close to a bomb blast, is the early fallout.  This will start landing on the ground within 30 minutes of the explosion in the immediate vicinity of where the explosion occurred, and closer to an hour later by the time you get 20 miles away.  By the time you are 100 miles away, it may not start landing until 4 – 6 hours after the event.  These distances are largely determined by the wind speeds and directions, the fallout will not land evenly in neat concentric circles, but will skew strongly in some directions and might not appear at all in other directions.  We can be reasonably sure about the time it will take for the early fallout to come back down again, but we can not guess as to the specifics of where it will land.

All of the early fallout is usually deposited within 24 hours.  The remaining lighter particles can take months before they return to the ground, and may do so anywhere in the world (information taken from p 14 of this excellent 1961 guide).

So even if you survived the initial blast from the bomb, you still need to quickly get to shelter to avoid the fallout.  Depending on how far you are from the explosion, you can expect fallout to start arriving some time from 30 minutes after the blast, and to continue for a day.

How Long to Shelter For

The next part of the process is sheltering until the radiation from the fallout has reduced down to an acceptable level.  How long will this take?  That depends on how much fallout is surrounding you, and also on its rate of decay.

You probably should plan to stay inside for several days before even thinking about what is out there, then at that point, warily stick a radiation meter out a door and see what it says.  If it starts chattering away at an alarming level, quickly retreat back inside and wait a few more days before repeating.  The two readings will also give you a feeling for rate of decline, helping you get a feeling for how much further you are likely to need to keep waiting.  We have a page here about detecting and measuring radiation and will shortly be releasing an article about how much radiation is safe and when it instead becomes dangerous.

Realistically, you should be prepared to shelter for as long as a month or more, and as we discuss in our article on detecting and measuring radiation, if after a month, radiation levels remain dangerously elevated after a month, and show only low rates of reduction, then maybe you are unlucky and have had a particularly large deposit of fallout around your retreat, and maybe you need to consider abandoning your retreat entirely.

Note that while you might choose to shelter for a month or more, you can almost certainly venture outside for very short periods of time during your period of sheltering, although you need to be very careful not to bring contamination with you back into your shelter.  Shoes/boots in particular will have fallout on them after walking around outside, and your outer clothes may too.

While outside you should cover up as much as possible, and we’d suggest breathing through a mask as well, particularly if there is wind and dust outside.  You’d want to remove your footwear and clothing outside the shelter, and shower outside, before coming back into the shelter.

What Is Your Likely Distance From a Nuclear Blast

This of course begs the question – how close to a blast are you likely to be?  This is the second of the two key variables to consider (the first being the strength of the blast).  Your distance from any possible blasts is clearly a very important question, but answering it with exactness is difficult, for two reasons.

The first reason is we can’t accurately guess exactly where any possible enemy may choose to target and attack.  But we can probably guess some places they won’t attack – rural locations with no significant industry or airports or harbors or major transportation hubs or other economic or industrial or military objects of value.

The only difficult part of making that prediction is not knowing for sure if there isn’t some super-secret government installation, or similarly secret commercial installation, something/anything of relevant strategic value, and known to the enemy but not to you.  Maybe there’s a huge big data-center or internet resource somewhere in the fields, or who knows what, where.

And even if there isn’t, maybe the enemy mistakenly believes there is!

The second reason is that no-one really knows what would happen in a high intensity nuclear attack. In addition to the unknown reliability and accuracy of enemy missiles to start with, there are three interesting complications.

The first complication is what might happen to the guidance systems of missiles as they go over the north pole.  Depending on how the missiles are guided, this could possibly cause errors to occur.  There have been no missile tests over the pole, so this is all untested theory.

The second complication is what might happen when our defense forces try to counter any incoming missile attack.  Alas, our anti-missile forces are pitifully weak and very few in number, and no-one would suggest they would have any tangible impact on a major attack featuring tens or hundreds of missiles and hundreds or thousands of warheads.

But even if we managed to deploy five or ten ABMs, they might possibly knock some incoming missiles off course rather than completely destroy them, causing the warheads to go and explode in the ‘wrong’ locations – and ending up hundreds or thousands of miles away from their original target.  What if the wrong location they arrived at was, by a bad turn of fate, directly above our retreat?  That’s definitely a consideration, albeit a very unlikely one.

The third complication is similar to the second.  It is not clear what happens to incoming warheads when one that arrived a minute or two or three before the later ones, detonates.  Will the incoming warheads immediately behind still operate, or be destroyed in the blast (a concept known as ‘fratricide’)?

That’s a question of little relevance to us if we’re hundreds of miles away, but a more relevant question is whether the force of the first warhead’s blast might not knock other warheads off course and cause them to veer off target and again end up detonating closer to us than was intended.

Such course deviations are probably not likely to push warheads hundreds of miles off course, but it is certainly conceivable they might deflect a warhead ten or twenty miles.  This is because whereas the ABM attacks take place earlier on the missile’s trajectory, where a small deflection ends up with a larger movement at the end of the journey, the effects of other explosions would impact only on the last twenty or so miles of travel.  Depending on your location, that might be relevant.

So, with a reasonable but not absolute degree of certainty, you can probably determine whether you are in a location that has a high or low ‘appeal’ as a nuclear target.  If your retreat is located in an area that has anything other than a very low degree of appeal, you’ve made a bad location choice!

We don’t mean to understate the potential devastation and catastrophic effects of nuclear weapons.  They are beyond terrible.  But, none of us should overstate their effects, either.  The anti-nuke campaigners, in a manner very similar to anti-gunners, have chosen to magnify the public perception of the outcomes of nuclear explosions, and while many people will die and many buildings will be destroyed, the good news is that very many more people will live.

This is a two-part article.  In the first part we looked at the deadly immediate effects of a nuclear explosion and how far they reached from the explosion’s center; if you have not yet read it, you should probably now do so.

We have a great deal of additional resources on nuclear issues and responses here.