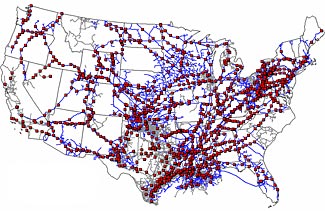 The red dots are pumping stations on our national gas pipelines. The Chinese military may now have the capability to destroy a thousand of these simultaneously through only a few computer keystrokes.

Due to its current abundance and low-cost per unit of energy, the US is becoming increasingly dependent on natural gas.

Already, 30% of all electricity comes from power stations burning natural gas.  Conversion programs to convert buses and trucks from diesel to natural gas are becoming increasingly popular due to the massive cost savings operators can quickly get from their investments.  And if you have gas to your residence, you know that the cost of the gas has dropped over the last few years, while electricity costs have stayed the same or risen, making it more and more appropriate to use gas for heating your water and your house and on your stove top.

An interesting thing about natural gas is that most people perceive it as ultra-reliable and as close to guaranteed to be always available as possible.  We’ve doubtless all experienced power outages from time to time, but when have you ever had an unexpected unscheduled gas outage?  Probably never; indeed some people view their gas supply as so ultra reliable that their emergency generator uses natural gas as its energy source.

Almost all the gas that is used somewhere comes from somewhere else, and travels from where it is extracted/processed to where it is consumed, by pipeline.  For sure, pipelines are physically vulnerable – a stick of dynamite could destroy a segment of pipeline any time and any where, but doing so requires ‘boots on the ground’ – you need people to physically get explosives, travel to vulnerable/accessible stretches of pipeline, blow them up, then escape safely.  None of that is impossible, but it is difficult and requires a substantial number of saboteurs if they are to have an appreciable impact on the supply lines.

We try to make it a little difficult for such attacks to occur; information on the exact location of gas pipelines and the related control stations is somewhat restricted.

But there’s an easier way, which the Chinese military have been preparing.  This article reveals that during a six month period in 2012, cyber-attacks traced back to the Chinese military were detected on 23 pipeline operators (there are about 30 major pipeline operators in the US), and includes the explanation that with the information stolen and access obtained through these cyber-attacks, it would be possible to cause enormous damage, either sequentially or simultaneously, and with the attackers never needing to leave the safety of their bases in China.

The article gives the example of using the access gained to mess up control settings so as to cause a thousand pumping/compression stations to simultaneously explode.  Destroying a pumping station is more serious than just knocking a hole in the side of the pipeline, and takes longer to repair.

Now think about the implications of this.  Not only would we lose the 30% of our electricity that is currently generated from natural gas, but we’d also lose the use of natural gas sourced energy in industry and at home, too, massively increasing our demand for the electricity that would already have become seriously in short supply.

Most households with gas for heating and cooking use more energy from natural gas than from electricity, so household demand for electricity would more than double (in winter, not so much in summer).  The same in many commercial applications, too.

As you may recall from the California electricity crisis back in 2000 – 2001, even a very small shortfall in electricity supply can be enough to massively mess things up.

Maybe this would not destroy our society entirely, but it would sure change our lifestyles substantially.  And all it would take to cause this is a few keystrokes on a computer somewhere in China – and who’s not to say that other countries hostile to the US don’t have similar capabilities or haven’t been given the information obtained by the Chinese cyber-terrorists?

Our point is simply this.  Scratch the surface of most of the essential underpinnings of our modern-day society and lifestyle, and examine the things we most take for granted, and you’ll find ugly exposed vulnerabilities that are growing rather than diminishing in size and scale and scope.  Barbed wire fences and armed patrols might provide physical security for our nation’s critical infrastructure, but the preferred form of attack these days is not this old-fashioned method involving real people doing real things to real structures, it is a ‘virtual’ attack via computer, a form of attack that we seem to be much less able to defend against.

Your non-prepping friends probably have no idea that a branch of the Chinese military, deploying a team of cyber-terrorists, now has the capability to destroy our natural gas supply system, which is part of the reason they are not preppers.  But you know, and hopefully you continue to prepare for and anticipate potential crises of all forms.

Oh – one last thing.  If a cyber-attack were to be launched against the US, of course it wouldn’t be only limited to our gas pipelines.  These same hacking exploits that created the pipeline vulnerability have been occurring regularly on other elements of our infrastructure, opening up vulnerabilities in many other parts of the fabric which binds our society functionally together.

The overwhelming impact of a cyber-attack would make Pearl Harbor look like nothing more significant than a gnat on an elephant’s rear.  A full-out cyber-attack would destroy just about everything we need to survive currently – energy, water, food, sewer, communications, you name it.  Such an attack, from start to finish, would take less than five minutes, and would have no prior warning at all.

Be prepared.  Be very prepared.