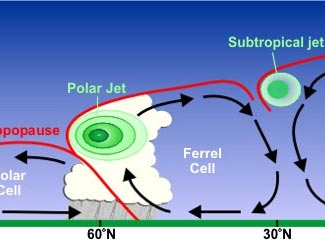 Part of a diagram explaining how jetstream winds are formed (full size here).

This is the second part of a three-part article series on using wind data to evaluate the risk of nuclear fallout at your retreat location.

If you arrived here directly from a search engine or link, you should probably go to the first part of the series that discusses the different types of fallout patterns and read that first before reading this second part (and of course, then following the link at the bottom on to the third part of the series).

If your nearby potential nuclear target is one which you deem likely to receive an airburst, then your calculation becomes fairly simple.  Sure, there will also be some local fallout too, but most of the fallout will be swept up into the jetstream and then distributed pretty much everywhere the jetstream travels.

There are two main jetstreams to consider in the United States.  In the northern part of the country, there may be a polar jetstream, and in the lower states, there may be a subtropical jetstream.  Both of them have their wind blowing generally from the west to the east, but they can also rise northwards or dip southwards, with such movements varying from day-to-day.

In general it is possible to say that while the winds are predominantly flowing from west to east, they start off, on the west coast, with a slightly southerly direction added to their movement, and by the time they reach the east coast they are flowing in a slightly northerly direction.  You can see the current form of the jetstream here.

Here’s an interesting series of four charts showing how much the jetstream can move, with its location plotted over the course of four days.

What this means for us as preppers is that, in general terms, we want to be mildly concerned about airblasts that might occur to the west of our location – whether they are directly west, to the northwest, or the southwest.

But in reality, jetstream carried fallout is not a great concern, due to it being distributed so widely.

An exception to that is if you’re downwind of the potential jetstream plume from many nuclear blasts – this is of course the case in much of the eastern United States.  Due to the potential distance between the source of radioactive fallout and where it lands, this is about as accurate a statement as one can make – the further east you go, the greater the fallout from the jetstream you might get.

Closer to the Surface Wind Patterns

If you need to evaluate the likely effect of closer to the surface fallout, ie from a surface or subsurface blast, or from a nuclear power plant mishap, then you have a much more complex – and much more important – calculation.

First of all, to show the degree of variability of fallout from a ground burst, have a look at this map of remaining contamination from Chernobyl (as of 1996).  As you can see, some areas close to Chernobyl are looking fairly safe, while other areas, a much greater distance away, are looking still very dangerous.

A much more dramatic view of the fallout from Chernobyl can be seen in this animated graphic which shows how the fallout traveled over time.  It isn’t clear exactly what the colors represent or what the time frame is, and an email to the person who posted the animation on Youtube went unreplied.

We guess this is showing lower atmosphere winds, and in total, probably over a ten to twenty day period.  Another way of ‘calibrating’ this animation is to understand that it took two days for fallout to reach a point in Sweden just out of Stockholm, 700 miles away (in other words, the fallout cloud was traveling at a rate of about 15 mph).

Another example of fallout distribution is shown in this chart, reporting fallout from the largest ever US nuclear explosion – the ground burst of the Castle Bravo device in 1954.  Fairly consistent winds, and less ‘friction’ caused by the sea, rather than the interference and disruption to smooth wind flows on shore (buildings, trees, hills, etc) saw high levels of fallout as much as 280 miles to the east of the explosion, but barely ten miles to the west.

The blast scooped out a crater almost 1¼ miles in diameter, and up to 250 ft deep.

The 15 MT Castle Bravo outcome can be considered a ‘worst case’ scenario.  Currently Russia has some 20 MT warheads on its SS-18 missiles, but most of its missiles are armed with warheads ranging from about 100 kT up to 1 MT.

Learning from Volcano Eruptions Too

More information about how fallout would travel can be obtained, in general, by looking at ash distribution from volcano eruptions.  Volcano ash distribution is interesting, and needs to be considered in light of the height the ash rises to in the atmosphere – sometimes it reaches well up into the jetstream, and sometimes it doesn’t.

The Eyjafjallajökull volcano eruption in Iceland in April 2010 disrupted air traffic over much of Europe for a couple of weeks, due to the enormous amount of ash thrown up by the volcano (about 130 million cubic yards), and its wide spread around much of Northern Europe.  Some of the ash made it up into the jetstream.

Here is an interesting series of maps showing the fallout spread as it evolved during the period of major activity by this volcano, and this page has an interesting discussion of how clouds of volcanic ash (or fallout) are swept along by winds).

To appreciate your degree of risk from lower level fallout (ie fallout that only rises a limited distance into the atmosphere and then drops back down to ground, missing the jet stream) you need to ‘join the dots’ between wherever the radioactive fallout might be released and where you are.

By this we mean you draw up a series of charts showing the prevailing winds at your location, at the point where the release would occur, and at relevant points in-between.

The first point to focus on are the prevailing winds at your planned retreat.  If your retreat generally has winds blowing towards the possible release location, that’s a very good thing.

But there’s a bit of a trap to consider, which requires you to look at more data to better understand things.  For example, let’s assume you are at Point R and the nuclear fallout comes from Point X, and you ascertain that the wind at your retreat (Point R) is blowing towards Point X, where the radiation release occurred.  So that means you’ve nothing to worry about, right?

Not necessarily.  Let’s also see where the wind at Point X is blowing.  You do that and you believe you’ve found more good news – the wind isn’t blowing directly towards you, instead, it is blowing at right angles to you.  Here’s a sample picture showing this – we use red arrows for winds carrying contamination from the release point, and green arrows for ‘safe’ winds.

So that looks close to optimum, don’t you think?  We’ll agree that you’re a prudent person, and so you obtain some more wind readings, and now you see a more detailed view.

This looks even better, yes?  But let’s not stop, let’s be obsessive and get as much wind data as we can.  You do some more research, and now you see this as a wind flow model.

This would seem to confirm all you need to know, right?  However, with so much information on the internet these days, and remembering just how far fallout can be carried by even mild winds, let’s grab some more data.

What do you think now?  Could it be…?  Let’s get a few more data points, and all of a sudden :

This now shows a very different scenario, doesn’t it.

As you’ve already seen in the real world examples linked to above, winds – and whatever they carry can travel on irregular paths, like a meandering river delta, with lots of crossing and inter-twined threads.  The winds that start blowing down the image in the first example then looped around and started blowing up again, taking the contamination and dumping it directly on you, even though your first data points seemed to suggest completely the opposite.

Clearly, this was a staged example, not a real world one.  But it teaches us two things.  First, we need to trace not just where the wind blows to, from our retreat, but also where winds are coming from prior to getting there.  Second, we need to follow the wind flow from the contamination release point for at least 200 miles to get a feeling for what twists and turns they might take.

Okay, so that’s an easy enough concept to be aware of.  But there’s a complicating factor that you’re probably already thinking of.  Winds don’t blow steadily, all day every day (and all night) and always from and to the same directions.  How do we factor in the variable aspects of wind flows/currents?

To answer the question about understanding and applying the wind data information you have collected, please now click on to the third part of this three-part series, Available Wind Data Sources and How to Use Them.  Also, if you’ve not yet read it, the first part of the series, Using Wind Data to Estimate Fallout Risk, is also, of course, helpful and relevant.

One Response to “The Two Types of Wind Effects to Consider”