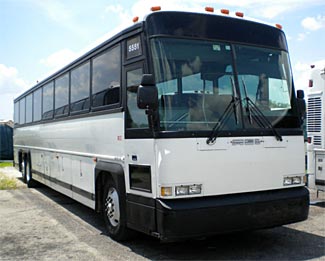 This is part of a series on using a bus or coach as a bug out vehicle.  If you arrived here from a search engine or link, you might like to consider starting your reading at the first article in the series, and then working through the complete series in sequence.  But you’re of course free to roam through the series in any order you wish.  Links to all the parts are at the end of this article.

If you’ve not thought about a bus as a bug-out vehicle before, you can probably immediately think of some issues and problems with the concept, but hopefully you’ll also see the positives.  Sometimes the positives may outweigh the negatives, but sometimes they won’t.  But let’s look first at the minus issues, then move on to the positive reasons in favor of a bus.

Oh, one more thing.  Let’s understand the naming convention, too.

The Difference between Buses and Coaches

We are incorrectly using the term ‘bus’ to describe the conveyance we are discussing, because it is the generic term most people loosely use.  But we should explain that, to the purist, a ‘bus’ is a vehicle designed to uncomfortably transport people short distances.  It is the vehicle used by your local city metro public transportation services, and will have hard small seats, room for standing passengers, probably a low floor rather than a high floor, no restroom or other comforts on board, little or no space for luggage, and probably travels fairly slowly.

What we have in mind for a retreat bug-out vehicle is a tour bus or a motor-coach (often simply called a coach).  This is a vehicle designed to carry people comfortably and long distances.  It has a high deck, giving good views for the passengers and allowing for capacious luggage compartments underneath the coach’s passenger compartment, used to hold passenger bags, spare parts, and whatever else.  A coach has a powerful diesel engine capable of moving the bus at freeway speeds, it has comfortable seats that probably recline, it has air conditioning, and sometimes a tiny restroom and maybe even some type of kitchenette or galley facility too.

Don’t confuse the local transit bus with the long-distance tour bus.  We are exclusively considering tour buses, not transit buses, in this article series.  We generally use the word bus rather than coach, but we always mean tour bus, not transit bus.

The Downsides of Using a Bus as a Bug-Out Vehicle

There are two main downsides to using a bus as a bug-out vehicle for a group of people (let us know if you can think of more!).

The first is that a bus is more unwieldy than a private car or a motorcycle.  It is less likely to be able to travel on dirt/gravel forestry type roads, it is slower and unlikely to be able to out-run any pursuers in cars, and it is a much larger target; although being a larger target does not necessarily also make it a more tempting target – some potential attackers, if they understand the bus is full of people willing to aggressively defend themselves, might choose to leave it well alone!

The larger size and weight of the bus makes it more dependent on quality roads and bridges, and it also of course has height clearance issues too – not a problem on most regular roads, but may be a problem if you’re needing to detour on back country roads that seldom see trucks and buses.

The second downside is that with a group of people all on one bus, you have put all your eggs in one basket.  If the bus has a mechanical problem of any sort, or is involved in an accident, then the entire group risks ending up with no transportation at all.  Compare a bus with ten couples in it to a convoy of ten private cars – if any one or two or even three or four cars failed, the people in them could be conveniently loaded into other cars and everyone could still continue on their way.

There is a partial solution to this – get two buses!  But even two buses are more vulnerable than ten cars.  So you need to carefully understand the pluses and minuses of consolidating your transportation into one or two coaches, or splitting it into many private cars.

The Benefits of a Bus as a Bug-Out Vehicle

Okay, enough of the negativity for now.  Let’s look at the other side of the coin – benefits of using a bus (or coach, if you prefer) as a bug-out vehicle.

Our first point is to acknowledge that the benefits of a bus vary depending on the size of your group and the distance you would travel to your retreat.  The more people who would be traveling together, and/or the longer the distance to your retreat, the more beneficial a bus becomes.

There’s little good sense in having a bus if there are only two other couples traveling with you, and your retreat is only 150 easy driving miles away.  But if you’ve managed to get ten couples together, then a bus may be more convenient than separate vehicles, and if your retreat is 1500 rather than 150 miles away, a long-range motor-coach might be a more comfortable and secure way of traveling the long distance.

We really like the ability of a bus to travel very long distances, non-stop, being completely self-contained, having its own restroom, basic food preparation capabilities, and carrying all the diesel that is necessary for the entire journey.

While it is true that any normal car has potentially a lot of storage space in it, especially if it has only one or two people in it, if the number of people increases, and if much of the trunk storage space is taken up with canisters of extra fuel, the storage space might end up as very minimal.

Even if you don’t need the storage space to bring essential items to your retreat, you can use it to store potentially essential items to ensure the safe completion of your travels to your retreat.  Spare tires, fanbelts, hoses, extra fluids and filters and any other essential parts that can be conveniently replaced and which could fail – you should have plenty of all of these with you.

The main consideration when weighing up the concept of investing in a bus is probably the size of your group.  To make best use of a bus, you need to have ideally ten or more people; any less than about eight and a bus is an unnecessary complication (and probably an unnecessary expense) rather than an added value improvement.

On the other hand, if you do have a bus, that might help you grow your group, by offering a very convenient easy way to bug out together.  And while we’ve been focused on the minimum size for a group to make a bus viable, the larger the group, the more and more viable the bus becomes (and the larger the group, the more viable your retreat community becomes in general, too).  You can almost certainly accept 40 – 50 people onto a single bus (or, for the sake of safety through redundancy, two buses).

But don’t buy the bus until you’ve built your group!

Part 3 –  Things to Consider When Buying a Bus/Coach