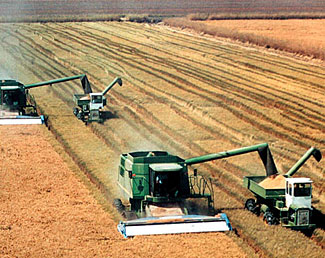 The development of hyper-efficient mechanized agricultural production revolutionized our country, but simultaneously increased our dependence and vulnerability on increasingly complex infrastructure.

Almost exactly two years ago we wrote an article ‘Urban Drift : A Worrying Trend‘.  The commentary and conclusions in that article remain as valid today as then, only more so.

The last two years have shown a continued move away from rural and non-metropolitan counties and to the cities.  When we wrote our article in May 2012, we said that about 80% of the country lived in urban areas and only 20% in rural areas.

USDA data shows that now only 15% of Americans live in rural and non-urban areas.  That shift from 80/20 to 85/15 is more significant than you might think – it is the difference between a 4:1 ratio and an almost 6:1 ratio.

Of particular significance is that this population shift isn’t just being caused by the cities growing faster – it is caused by people leaving the rural areas and moving to the cities.  There are now fewer people living in 1200 counties than there were in 2010 (in total, a reduction of 400,000 people), and while this has been partially offset by growth in 700 other counties, a net imbalance remains, with the cities an even more unbalanced part of our country (the USDA has an interesting chart showing which counties had growth and which lost people on the page linked above).

The period 2010 through 2013 marks the first ever extended period of rural depopulation.  Sure, often in the past, rural population growth has lagged behind metro growth, both in percent terms and also in absolute numbers, but now we are seeing four years of actual decreases.

Furthermore, many of the remaining rural residents are not productive – they are either retirees, or ‘lifestyle’ dwellers who might actually have non-agricultural type jobs that they telecommute to.  Many more are service/support workers – the people who work in the schools, the stores, and the local governments.  The actual number of people who are self-supporting is remarkably few.

Our cities increasingly rely upon food that has been grown using intensive/mechanized forms of production, and which are located increasing distances from the cities themselves.  If our modern energy-intensive world changes, then the food can no longer be grown so efficiently, and it won’t be able to be transported as far, making for crippling food shortages in our cities and all that implies.

In other words, in the last two years, the situation has got worse, not better.  Cities have become even more dependent on even fewer people supplying them with the food they need.

As preppers, we need to be sure we can supply our own food WTSHTF.

3 Responses to “Urban/Rural Imbalance Gets Worse”