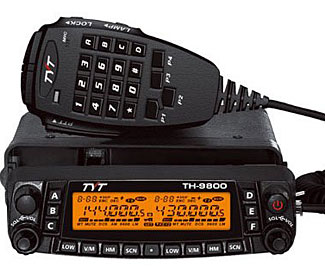 We’ve written before about how wonderful radio repeaters are for extending the range you can communicate with your two-way radios.  No matter what you do to your portable and in-vehicle radio transmitters and receivers, sooner or later you will probably have to consider using a repeater to extend your communications to reliably cover the region you need to be able to keep in contact with.

But maybe you are very fortunate, and your terrain/topography is such that you have reliable radio comms all over your retreat and adjacent areas.  Does that mean you don’t need to think about repeaters any further?

Maybe.  But also, maybe not.  There are two other applications for repeaters that you might want to consider.  Please read on and see if either (or both) might apply to you.

This is something that could be of value to many preppers.  Maybe you have a heavy-duty high-powered radio in your vehicle, and a fully optimized antenna mounted on it as well.  Maybe that gives you the range you need to be able to communicate reliably everywhere you are likely to be, and with everyone else who you might need to communicate with.  But what happens when you step out of your car and switch from the 50 watt (maybe more) unit in your car to a 5 watt (probably less) unit in your hand, from a full size antenna on top of the vehicle roof to a short stubby little thing in your hand?

Quite likely you will find yourself unable to punch out or pull in the signals you need, and you’re now in a position of dual vulnerability.  Out of your car, you’re less protected, and you’re also out of contact with the rest of your community.

You’re not the first person who has struggled with that problem.  It used to be an issue for police officers, the world over.  Now, not so much, because there is a solution that they’ve widely deployed, and which you might wish to consider, too.

This is an in-vehicle repeater.  It uses the high power, high quality circuitry, and optimized antenna on your vehicle not only to send/receive messages to far-away contacts, but it also retransmits the signals it receives, on a different frequency, to allow you to pick up the repeated transmissions more clearly from a hand-held transceiver.  Yes, it is also simultaneously ‘listening’ for the signals you send it from your handheld radio, too.  For you, out of the vehicle, you no longer need the ability to receive signals from people far away, and to be able to transmit back to them.  You only need to be able to receive transmissions from your vehicle, and send back to it.

These days, when you see a police officer talking into his chest microphone, that radio is probably not transmitting all the way to wherever the main receiver tower is, but only to his nearby cruiser.  He is now safely in contact, as long as he is in range of his vehicle.

If you seek a similar capability, and have the appropriate FCC ham or commercial license to operate the radios and repeater, you can do the same.  Many mobile (ie in-vehicle) type two-way radios have what is termed a ‘cross-band repeater’ capability – it is generally easier and less expensive to have the signal that is being repeated to be retransmitted on a very different frequency to that it was received on, which is what ‘cross-band’ means.

These amazing units can be very expensive, but do not need to be, and don’t really cost much more than a normal dual band transceiver.  For some time we have liked the Anytone AT-5888UV dual band mobile radio

This latter radio is not only slightly less expensive, (currently showing at $278 on Amazon – update :  now about $210 in June 2016) but also has four bands in it rather than two.  It has the same 2M and 70cm bands that the AT-5888UV offers, plus also the 6M and 10M bands too.  The 6 meter band is an interesting addition, and – with the right antenna connected – can give considerable extra range compared to the short-range on 2M and 70cm.

Currently the AT-5888UV does have one advantage over the TH-9800.  It is compatible with the CHIRP programming software, and from our perspective, if you can simplify the management of your radios by using the same software interface for multiple radio types, that is an enormous plus.  .  Update – yes, all good things come to those who wait.  The TH 9800 is also now supported by CHIRP.

Note that you need a radio that has the capability to transmit and receive ‘in both directions’.  If it could only repeat in one direction, you would be able to listen but not transmit (or vice versa) – you need the radio to support the repeating both ways.  The two radios mentioned above would be good choices and have this capability.

This is an interesting consideration.  As you know, it is very easy for anyone with a scanner to monitor your radio transmissions, but if you are transmitting on one frequency and listening on another, maybe it becomes harder for a casual person listening on a scanner to hear your complete conversation.

That’s a definite ‘maybe’ because if they pick up the repeater signal, they’ll get both sides of it.  But depending on their location and settings, maybe they’ll only get one side or the other of the conversation.

There’s another side to this coin, however.  If you adopt this approach, you are now doubling the frequencies that are carrying your signals – and the repeater is probably sending them over a wider area.  So is it a good idea or bad idea?  Frankly, we’re unconvinced of its good sense, and mention it here more for the purpose of rebuttal than recommendation.

This concept can be made more ‘semi-secure’ (if there is such a thing) by splitting your transmit and receive frequencies more broadly, perhaps having one in one frequency band and the other in another.  But whatever you do, the repeater signal will be carrying both sides of the conversation – find that, and anyone monitoring can hear the entire conversation.

If you are going to do this type of split transmitting/receiving, you of course need to use a repeater.