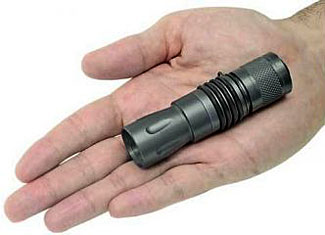 The Surefire M1 is an inexpensive high quality IR Illuminator that works well with most night vision devices.

In theory, a good night vision device will be operated in passive mode, and is able to brighten up very dimly lit scenes to a point where you can usefully understand what it is showing you.

In reality, many times this is not possible, either because there is too little light, or because the light, while present, is ‘wrong’.

By that we mean light sources in the background can drown out the details in the shadows of objects in the foreground, just the same way as when you take a regular photo of anything with a bright light in the background – the objects in the foreground are too dark.  When you have strong backlighting, you need to counter this with strong front lighting, ie from yourself, so as to get detail back into the shadows.  With a camera, you use a flash.  With a night vision device, you use a supplementary illuminator.

You should keep your NVD calibrated – both via settings on the device and by way of your use of supplementary light – so that everything in the area you are surveying shows some sign of greeny/grey rather than solid green/black.  Solid green/black obscures whatever it is in those areas and is dangerously deceptive.

So it is common – and necessary – for most NVDs to include a light source that you can switch on to actively illuminate what you’re looking at.  These light sources are always infra-red rather than normal white light.  This is so as to maintain a stealth factor and to keep whatever tactical advantage you might have by means of your NVD.  A normal visible light source would work perfectly well, of course, but using a regular flashlight makes your own presence obvious to any animal or person out there, and also allows anyone else out there to benefit from the light that it shines into dark spaces.

None of these outcomes and tactical shifts are desirable.

Perhaps the worst part of this is that if the aggressors also have some way of seeing infra-red – their own NVD, for example, you’re at a double disadvantage.  They can surely see your beam of IR light, no matter how poor and primitive their NVD, but you don’t know they can see you.  Ugh.

Even if your adversaries don’t have any type of NVD, there is still a possible way you might risk disclosing your presence.  While the human eye can’t see infra-red light, some IR illuminators will glow, weakly, with a bit of a visible red glow that can be seen by the naked eye.  On a dark night, maybe the aggressors have adjusted their eyes to the low light and simply see the dim glow from your illuminator, even without needing to have NVDs of their own.

For all these reasons, we recommend you use illuminators very sparingly.  However, when you do need to use one, it is usually a case of ‘the brighter the better’ and you may find that the built-in illuminator on your NVD is inadequate.  So if you are going to use an illuminator, get a powerful and therefore probably separate illuminator (with a bit of luck, if the other side have low quality NVD gear, your powerful illuminator might even overload and destroy their gear!).

There are three things to consider when choosing a supplementary illuminator.

The first is its brightness.  As we said, generally, the brighter the better, but if you expect to be using this only at very short-range (ie within your retreat), too much brightness might overwhelm your NVD and cause everything to be white and washed out.  You’ll need to test any illuminators you get, and hopefully you’ll source them through a supplier with a generous return policy!

The second is how broad the beam angle is.  For short-range work, you want a broad beam at least as broad as the field of vision through the NVD.  This is so everything you are looking at is illuminated – you don’t want to leave any dark spots where surprises may be lurking.

If your requirement is for long-range illumination, you will want a narrower beam so that it carries further before getting too dispersed (and of course, the brighter the beam, the longer the range, too).

The third is the evenness of its beam.  This is very important – you don’t want a ‘doughnut of death’ where there is a bright ring of light but a dark patch in the middle.  Make sure the beam evenly illuminates everything within its coverage – this is even more important than with flashlights, because NVDs handle variations of light intensity and contrast within their image less well than our naked eyes do, and because of the ‘unreal’ or indirect nature of the image shown on an NVD display, you’re never quite sure if a dark patch is due to nothing being there or just a weakness in the NVD and the illumination that is driving it.

One other factor that few people consider, but which we think very important, is how the beam is switched on and off.  Depending on what you are using the illuminator with and what else you expect to be doing with your hands, you might find the best type of switch is a ‘momentary on’ switch.  That is, you press the switch and for as long as you are holding the switch down, the light is on, and as soon as you take your finger off the switch, the light goes off again.  This is much better than a switch that you press and release to turn on, then need to press and release a second time to turn off.  If things get ‘busy’ you might not be able to conveniently turn the light off again, and risk leaving the light on and drawing attention to yourself.

Of course this consideration is most relevant when using regular white light that everyone can see, but you should treat an ‘invisible’ IR beam as just as visible and dangerous to you as a regular flashlight, because for all you know your adversary also has NVD and your IR beam will appear like a huge searchlight shining into the sky when he looks in your general direction.

One more switching consideration.  It is really nice if there is a way to ensure the device doesn’t switch on accidentally when bumped – particularly if it is a ‘permanent’ on rather than a temporary on.  You might inadvertently have your IR beam on and not even realize it yourself!

A good general purpose illuminator is the Surefire M1

(about $120 on Amazon).  The former pre-eminence of Surefire for all types of tactical lighting products is these days under challenge by many new manufacturers, sometimes apparently offering better seeming products and at better seeming prices, but when you want to make a ‘safe’ choice and know, for sure, you are getting something built to the highest standards of quality and reliability, we feel that Surefire remains the best choice.

If you are wanting an illuminator for long-range surveillance, then you’ll find the M1 inadequate.  But a word of warning about long-range surveillance.  Don’t try to use your NVD further than it is capable of being used – there comes a point where the limits of resolution and the fuzziness of the image being displayed to you make it less useful, and no amount of extra illumination will make that any better.

For longer range purposes, we like the Luna Optics

, but we’re unconvinced they offer better performance than the IR LED units.

The Deceptive Dangers of an Illuminator

We need to state something that we hope might already be obvious.  You already know that one danger of using an illuminator is that your adversary might detect the beam from the illuminator, creating a flipped tactical situation where they for sure know where you are (and also know what you’re looking at and so can avoid being there) while you have no idea at all if there are any adversaries out there at all.

The additional issue is in two parts.  Firstly, please understand that no matter how powerful an illuminator, it won’t show you something that you aren’t looking at and illuminating.  Secondly, the extra vision capabilities that you believe you are enjoying – and your inevitable feeling of having ‘tactical battlefield superiority’ is largely an illusion.  Do not abandon your defensive posture.

Using lights with NVDs is a bit like submarines stalking each other in the ocean.  All submarines have both active and passive sonar.  And, similarly, all submarines almost exclusively use only passive sonar.  It is only on rare occasion that a submarine will send out an active ‘ping’.  Although doing so might give that submarine useful battlefield data for a relatively short distance around itself, the sound of the ping will also reveal its formerly hidden location to all other submarines for a much greater distance around.

It is the same with illuminators, or lights in general.  Sometimes you have no choice but to use them, but when you do, the tactical situation changes massively and potentially unpredictably.

One scenario where illuminators might sometimes have a value would be if your retreat comes under attack at night and your attackers are hard to see in the dark.  In such a case, turning on external floodlight type illuminators, shining out from your retreat, would help you to see them more clearly.

But is this an overly complicated solution to a simple problem?  Why not use regular lighting, which means everyone in your retreat can see the aggressors without needing NVDs, and the aggressors are blinded by the bright lights which makes it difficult to see where you are, semi-safely located behind (and to one side, please!) of the lights.

Sometimes we become too reliant on technology, and certainly as preppers, we know the inherent dangers of this.  If you’re trying to get good vision of distant objects, don’t overlook the value of regular binoculars which can work well, even at night.

If you want to use binoculars at night, there’s one important thing to do – make sure that when you divide the diameter of the objective lens (the big one that faces towards what you are looking like) by the magnification factor, the result is at least seven.  This indicates the size of the image that you see through the eyepieces, and you want it to be sufficiently large to fill your eye pupils, so that at night, all your light collecting ability is being used.  The lower the number (for example, a pair of 8×40 glasses with the number 5 being derived) the less light collecting and the poorer they will work for you at night.

The classic binocular rating is 7 x 50.  This is close to the best all-round day/night portable binocular.

If your budget extends to night vision devices, you will need to also get supplementary illuminating devices so you can sometimes and selectively optimize the ability of your NVDs to reveal details of what is otherwise obscured in the dark shadows around you.

But using a supplementary illuminator can be a double-edged sword.  If an adversary also has NVD capabilities, your illuminator has clearly revealed your position and also shows where you’re watching, potentially giving a massive tactical advantage to your adversary.

For this reason, use such devices selectively and carefully.