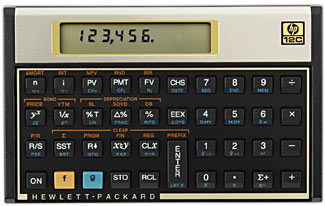 The HP-12C – possibly the finest calculator ever and still being made by HP.

So, after TEOTWAWKI, what happens when we need to do ‘figuring’ – to do some sums, to calculate some values?  Our computers are dead, our notepads fried, and our calculators have run out of batteries.

We have several suggestions that will make your life easier.

Our first suggestion is to stock up on calculators that use photo-electric cells to power them.  These can be expected to last for probably 15 – 25 years, maybe longer, and if you store them in a cool dryish sort of place that gets neither extremely hot nor cold, that will be a good environment for longest life.  Solar powered calculators are inexpensive, lightweight, and not very large (but note that larger ones are easier to operate and you’re less likely to make errors entering numbers, and have easier to read screens).  Amazon sells a broad selection, many at less than $10 each.  You want to choose display only calculators, not printing calculators – the printing calculators use a lot more power, plus you then need rolls of paper and ink ribbons too.

We recommend you store two or three solar-powered calculators in your Faraday Cages.  Take them out, one at a time, if you need to have one readily accessible.

The second is to get one of the brilliant Hewlett-Packard HP-12C calculators – in our opinion, the finest calculator ever made.  Not only can this calculate just about anything and everything you’d ever want to calculate, but its batteries last almost literally forever.  The record is currently an HP-12C with batteries that are now 22 years old, and it is still going strong.  In other words, the limit is more the storage life of the batteries than the power used by the calculator – we regularly get 10+ years of life out of each set of batteries we use (although with the new non-mercury type silver-oxide button batteries, we suspect their ‘shelf/storage life’ is not as lengthy as with the earlier mercury batteries – we’ve seen figures claiming five years for silver oxide in place of ten years for mercury batteries – yet another case where Congress has legislated a good product out of existence for the thinnest of reasons).

The HP-12C design is now over 30 years old, but it was so perfect when it first came out that customers have resisted every attempt by HP to modernize or replace it.  The closest to a replacement is the latest ‘Platinum edition’ version of the HP-12C, and you can interchangeably get a regular or a Platinum version; the differences are trivial and mainly ‘under the hood’.

The only thing to be aware of is that there’s something missing from the classic HP-12C calculators, and obscured on the Platinum edition versions.  The equals sign.  The calculator uses a different way of calculating – you key in the first number then hit the Enter key, then you key in the second number, then you press whichever function key you wish for adding, subtracting, multiplying and dividing, as well as very many other functions too.  This is called ‘RPN’ or Reverse Polish Notation; it takes a bit of getting used to but is actually surprisingly logical and simple.

We own several of these calculators; they are robustly built and never seem to break.  The best thing about the RPN keyboard is always seeing the puzzled look on other people’s faces.  ‘Can I borrow your calculator?’.  ‘Ummm, yes, sure’ we say, unenthusiastically, maybe adding ‘it is a bit complicated to use’.  But our disclaimer about it being complicated is always ignored.  Then, invariably, two things happen.  ‘How do you clear it’ and ‘Where is the equals sign’, followed, a minute later, by the borrower handing it back to us!  This means that we’ve never lost a calculator by someone ‘borrowing’ it and ‘forgetting’ to return it!  They cost $50 – $60 each these days (used to be more) so we’d rather not have them disappear.

You might also want to consider an HP-11C ‘scientific calculator’ – most of the extra functions on a 12C are financial; if you think you might need some trigonometry functions in particular (useful in surveying and building) then get an 11C too.

Again, keep your HP-12C in a Faraday cage until you need to deploy it.

This shows the stylus and the clearing bar that come with an Addiator adding/subtracting device.

Now it is time to go lower tech.  There are two low tech solutions to consider, one being better than the other.

You should consider getting a hand-operated adding machine.  You might immediately think of some of the large boxy machines that used to sit on accountants’ desks – quite possibly with a roll of paper coming out the end as well, and a handle that the user would pull towards them to enter each number.

Those are great units, but you’re going to run out of rolls of paper and ink ribbons very quickly, so we don’t recommend them for a Level 3 type scenario.  However, there’s another more subtle challenge to them, too.  They have dozens, or even hundreds of moving parts, and that’s a lot of things to go out of adjustment, springs to break, or in some other way to have something fail.

Slightly simpler, and generally older, are machines that simply display the running total in a window rather than print on a piece of paper.  Some look like ‘regular’ adding machines, others are more complicated and can be used for multiplication as well as addition.

While it is a long time since machines such as the American Rapid Calculator Co pinwheel adding machines were made, the Soviet Union made similar machines called a Feliks brand Arithmometer.  I’ve seen them dated from the 1930s to the late 1970s – they stopped production in the early 1980s and one of those might be worth considering.  But be aware that although they look to be very solidly built, like much in the Soviet era, that is as much illusion as reality.  It is reported that the gears inside are made of low quality zinc.  As a bit of trivia however, the name ‘Feliks’ is the first name of Felix Dzerzinsky, the first head of what became the KGB, and were originally made in a factory in Moscow that subsequently became the KGB headquarters (on Lubyanka Square).

Some of the German machines (eg Thales up to the late 1960s and Brunsviga) are not all that old, either.  All these ones that look similar spring from the same design, originally by a Swedish-Russian man in St Petersburg.

Make sure you’re getting a non-electric machine, though.  There are lots of Monroe type adding machines that look manual but are electric, and can be trouble-prone and very difficult to repair.  If you’ve ever seen one of those working, you’ll immediately understand how the moving parts are considerably stressed as it crashes and clatters its way through to a solution.

There’s an even simpler solution that is as close to fail-proof and fool-proof as it gets.  An Addiator.  These units are tiny (about 2″ x 6″ x 0.5″), weigh only a couple of ounces, and are totally simplistic to use with almost nothing to break or go wrong.  They can easily be found on eBay and elsewhere, probably costing no more than $10 – $20 a piece.  Search for ‘Addiator’ or ‘Arithma’ on eBay – we just did and found 44 listings.  Make sure the unit comes with its stylus – other things can be used instead of course, but if it has its stylus to start with, so much the better.

Addometers are slightly less common and more expensive, and not quite as intuitively obvious to use.

Other similar products exist, for example, the Sterling Dial-a-matic.  Pick and choose whichever style you like, they’re all reasonably reliable and very easy to use.

Make sure that the unit you select has a lot of digits – ideally eight or more, so you can add up reasonably large numbers.  We’ve seen Dial-a-matics with as few as four, which is hardly worth the hassle of buying, owning and using.  Also make sure the machine can subtract as well as add (as best we can tell, the Resulta mini adding machines won’t subtract).

Many people say the Faber Castell 2/83N slide rule is the best ever made.  Last produced in 1976, but still available on eBay and elsewhere.

So your Addiator will see you right for adding and subtracting.  But what say you need to multiply or divide – or, even worse, to work out square roots, or do trigonometry?

Until the early 1970s, everyone used slide rules for such things.  Sure, they don’t have eight glowing digits of instant and near perfect accuracy, but for a century or more, slide rules were used to calculate and build everything, even jet planes and rockets.  The happy reality is that most of the time, we don’t need eight significant digits, and rather than being ‘significant’, most of them are illusory because the measurements we are feeding in to our calculators are imprecise to start with.

Some slide rules might still be manufactured, new, in China perhaps.  But we suggest that the best approach is again to go to eBay and pick up one from there – they have an entire section dedicated to slide rules.  We’ve seen good slide rules sell for $20 – $40.  You want to get one that is 10″ in length, not the half sized ones, and not the double sized ones.  Make sure it isn’t missing its cursor (the clear plastic thing that slides along it), and the more scales it has, the merrier.  The very best slide rules have a pair of ‘folded’ scales that in effect give you the benefit of a 20″ rule without any of the attendant disadvantages – one scale set goes from about 1 – 3.2 and the second scale set goes from about 3.2 – 10, and easy set has more graduations to give you a bit more accuracy.  We know that some of the double-sided Faber Castell slide rules (ie the W scales on the 2/83 and 2/83N rules) have these folded scales, and some of the other brands have them on their high-end slide rules too.

Other than these considerations, you can’t really go wrong with any of the different brands or models.

Ideally if it comes with instructions (and in English – some of the slide rules are sold from other countries and their instructions aren’t always in English) that will save you from any need to buy a book on how to use a slide rule, too.

Giving you the best of both worlds, the German company Faber Castell bought the Addiator adding machine company and made combo units – slide rule on one side and Addiator on the other.  Some of them are still available.

The Ultimate in Low-Tech Calculating?

So, there you are with your Addiator and slide-rule (as well as a solar-powered calculator and perhaps even an HP-12C).  You’re all set to calculate whatever the future holds, right?

Yes, you probably are.  But if you wanted to regress back one further step in calculating, you could always get an abacus too.  A skilled user of an abacus can do calculations almost as quickly as a modern person with a calculator, but it does require skill and practice/training to become that proficient.

So you might decide to pass on that for now, but if you want to be totally prepared for everything, get a book on how abacuses work so you can simply build your own if needed in the future, and have the information you need for how they work.

2 Responses to “How to Perform Calculations Without Calculators”