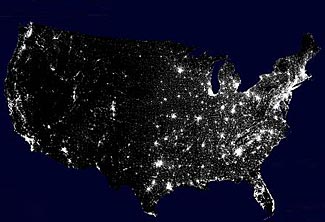 This is not a ‘lights at night’ type map.  It expresses US population clusters by showing one white dot per 7500 people.

Preppers have a love/hate relationship with nearby groups of other people, especially residents of towns and cities.  If the nearby people are friendly and also prepper types, then it is generally good to have supportive people nearby.  But if the people are ill prepared, then they are almost certainly going to present problems WTSHTF.

Some proximity to people is a good thing, but too much proximity to people of unknown values is not so good.  Indeed, even the nicest of people may pose problems if they are not capable of being self-sufficient for an extended time period, and it is almost an unavoidable truth that city dwellers can not be capable of supporting themselves beyond whatever amount of stockpiled food and energy they have at the start of any adverse event.

So, in choosing an ideal retreat location, a prudent prepper wants to be away from larger population centers, while still reasonably close to smaller groupings of people.

How far away from larger population centers should one locate?  There are lots of factors that go into creating that answer, which simply stated can be considered as ‘the larger the group of people, the more difficult to reach you wish to be’ – difficulty being a measure not just of distance but also of accessibility.  For example, maybe there is some sort of geographical obstacle such as a river or mountain between you and the population center you wish to avoid.

Our point here is that in some parts of the country, no matter how hard you try to avoid too large groupings of population, you’re never going to succeed.

Shown at the top of this article is a downscaled copy of a US Census Bureau map that features one small dot of white for each cluster of 7500 people in the continental US.  You can see a larger and clearer version directly from their website, here.  And, for a finer degree of display, here’s a much larger map that shows a dot of white for each 1000 people in the country (you’ll need to expand it considerably to get the full effect).

Don’t confuse these maps with the images you might sometimes see that shows the US by night from a satellite.  While it is true there is a correlation between lights at night and population, these US Census maps are very much more accurate indicators of where people live than the ‘US from space by night’ maps.

The second is that much of the west is relatively empty, once you avoid the I-5 corridor and the obvious population clusters around major cities and the coast.

But there’s a trap inherent in this representation.  Not all of the black space is the same.  Some of it is rugged mountain that no-one could support themselves in.  Other large parts are desert.  There’s more to choosing a location than simply looking for low density population.

That map expresses density in terms of people per square mile, which begs the question – how many people can live on one square mile?  Well, that depends of course on whether it is a square mile of lake, of desert, of mountain, of city, or of high quality arable land with plenty of water and a good growing climate.

So the answer is a big fat ‘it depends’.  But we can make some guesstimates.  Firstly, it is more helpful to think in terms of acres – a measure most of us are more familiar with – than square miles.  There are 640 acres in a square mile.

So that immediately puts this population density map into more helpful context.  All the four lighter color/lower density segments have fewer than one person per acre.

If you accept the rule of thumb that is sometimes used –  you need at least one acre of reasonable quality land for each person, plus some extra space for roading, dwellings, other structures, and miscellaneous ‘non productive’ uses – it seems that even the upper limit of the fourth zone (499.9 people per square mile or 0.8 people per acre) may be almost a sustainable population density, but only if one can establish that the effective land quality is average to good.

A clue – although a very limited one – about the quality of the land per county can be gleaned from this 1992 map, which shows how much of each county is used as farmland, and is made somewhat more helpful when matched with this partner map showing the dollar value of agricultural products sold.

When you want to start looking at data in smaller sized chunks than entire counties, that is possible too, with population data by zip code also available.  When you match that to the land area per zip code, you can work out the population density for zip codes too.

But maybe that’s getting a bit complicated.  Here’s what we do when helping people compare areas.

Firstly, we’re seldom looking outside of the American Redoubt states, and most commonly, Idaho and western Montana only.

We’ll sometimes draw circles or even irregular shapes around the population concentrations in a region to show the areas to avoid, and maybe also shade out other unsuitable areas, and then what’s left is the area to focus on for finding/building a retreat.

But, and as we hinted at before, the major use of this analysis is not so much to find suitable areas within the Redoubt, but rather to disprove people’s claims of suitable locations elsewhere in the country.

Whether you’re hoping to find a good location elsewhere, or simply seeking to confirm your choice of location, you’ll find some simple analysis using these tools very helpful as giving one perspective on your location choices and the issues associated with them.  If you need more help, you can always engage us to provide more detailed analysis and recommendations.