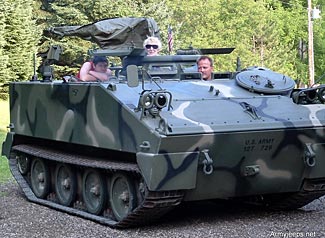 If you found yourself suddenly gifted with several million dollars, and assuming you had some left over after spending money on all the usual things, maybe you might choose to treat yourself to a really neat vehicle to stick in your retreat’s garage.

The issue of successfully defending your retreat against armed attackers post-WTSHTF is one of considerable debate.  Some people choose to ignore the issue entirely, and claim they have no need for serious preparations and defenses, either because their retreat is well hidden, or because they are in a region with plenty of like-minded folks, or because they don’t believe that people would actually come after them and attempt to steal from them by force (and – we fear – do much worse than that too).

We’re not going to re-debate those points.  We’ve discussed them before, and might again in the future, and suffice it to say for now that we feel it an essential component of the prepping mindset to consider not just best case but also worst case scenarios, and to prepare (within reason) for both.  What sort of prepper allows themselves to be caught out by something that they say weakly in excuse about ‘Oh, gosh, we didn’t think that was likely to happen’?  Isn’t prepping all about preparing for less likely things which, if they do happen, will seriously destroy our lives and our lifestyles?

This article is simply looking at some unusual types of defensive vehicles.  And, yes, clearly these ‘defensive’ vehicles could be used just as well by someone else as an offensive vehicle – to bring the battle directly to your front door.

That thought of course begs the difficult question – what would you do if a bad guy turned up on your doorstep in a tank?

Unfortunately, that’s a far from impossible scenario (depending on how close your retreat is to a base with armored vehicles on it at present).  When the rule of law crumbles, there will be many thousands of tanks and other armored vehicles on bases around the country that will be liable to being ‘repurposed’ by people with evil intent.  We can only hope they run out of fuel (or ammo and/or spare parts) for their armored vehicles before they reach your retreat.

But what about the lawful availability of armored vehicles, today?  Did you know there’s a reasonably extensive market that trades in older armored military vehicles.  Of course, the main guns have usually been ‘de-milled’ and made inoperable and close to impossible to repair back to working order, but as a secure platform that would resist small arms fire up to and probably including the .50 BMG round, they are very interesting.

Some of the older vehicles also have fully analog type engines that are probably about as sure to survive an EMP attack as anything out there.

Of course, a heavy armored vehicle is going to give very bad gas mileage, and so you don’t want to use it as a daily driver.  Tracked vehicles can also be very maintenance intensive.  But as the ultimate all-weather and all-terrain vehicle that you can use hopefully in almost any type of weather and ground condition, and with a secure protected compartment that you can either escape within or fight from, an armored vehicle gives you a new level of tactical options that hopefully the bad guys ranged against you can’t match.

Remember that not all tracked vehicles are armored, and of course, general purpose ‘military’ trucks and other vehicles are probably not armored either.  And not everything with impressive looking tracks or really big wheels will manage to proceed in deep soft snow or bottomless mud.

Let’s not forget our own government – they sell off just about everything imaginable, including through this site.

Perhaps the best site for armored vehicles is this one.

In addition, who knows what you mightn’t find locally as well.  Ask around, do some Googling, and the chances are, if you want to indulge yourself in such a vehicle, there’ll be exactly what you’re looking for, somewhere in the country, and priced from the low tens of thousands up to the middling hundreds of thousands, depending of course on all the usual things such as market appeal, practicality, and condition.

One Response to “The Ultimate Vehicles For Your Retreat?”