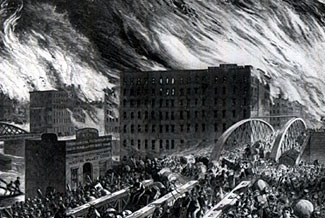 This artist’s impression of the tens of thousands of people fleeing the 1871 Great Chicago Fire could become a modern-day reality after uncontrollable fires break out following an EMP event.

We wrote, just now, about how the director of two congressional advisory boards claimed that it is practical to protect against an EMP attack, and that the cost of this would be only $2 billion.

We believe him to be spectacularly wrong on both points, and you should read our article to see just how far off base he is.

Some of the newspaper reports, all of which uncritically repeat his quote, have widened their article to refer to another self-appointed EMP expert, Dr William Forstchen, who estimates that approximately half a million people would die in the first few moments after an EMP event.

Okay, so maybe he is correct about that.  Indeed, looking at the numbers in the article, if the 7,000 planes in the air at the time of an EMP event crash, and each plane has 150 people on board, then that is over 1 million people without considering however many casualties might also be incurred on the ground where the planes crash (probably not very many, actually, but that’s not the point we’re examining here).

His further point about fires breaking out, and not being controllable, is definitely true.  In the modern high-density city centers, and without any fire trucks or water, even small fires will quickly become multi-block unstoppable conflagrations.

So what is the point we’re seeking to make?  Simply this :  The deaths in the first few minutes after an EMP are relatively trivial and inconsequential, compared to the deaths in the days and weeks that follow.  Any article which talks about half a million deaths immediately after an EMP does the nation a disservice by not pointing out that tens of millions more people will die in the days and weeks after.

Why will so many people die after an EMP?  It isn’t as though an EMP creates any blast or heatwave, or even much nuclear radiation.  The problem is that when the EMP destroys much/most/all of our nation’s electronics, it therefore destroys all our support infrastructure.

Think about the most critical things we need to preserve human life.

Shelter – with no electricity, we no longer can heat or cool our homes.  For that matter, if we live in a high-rise, we can’t use the elevators any more, either.

Water – with no electricity, town water supplies can no longer treat the water they pump to us, and – oh yes, they can’t pump it to us, either.  (Note that the lack of pumping will also cause most sewer systems to fail, too.)

Food –  Many/most trucks and trains will fail due to the EMP.  Those that don’t fail will run out of diesel or electricity, and where will they get more?  The refineries will also be offline – their control circuitry will have been ‘fried’.  Without transportation, and without refrigeration, how will our supermarkets get restocked?

So, somewhere between a few days and a few weeks, people will start dying from lack of water, lack of food, and from general disease due to lack of drinkable water and sanitation.

People in the cities won’t be able to conveniently evacuate out of the cities, either because their cars will have failed (due to their onboard computers) or because they can’t buy gas to drive with, or perhaps because the roads are clogged with stalled/failed vehicles.

On the other hand, the probable complete breakdown of law and order that will quickly follow an EMP (imagine the police with no cruisers and no radios – they’ll be uncoordinated and unable to protect or control the cities and will quickly give up trying) will definitely motivate people to try and flee the cities and go somewhere safe.

Even if they could evacuate the cities, where would they go?  85% of our population now lives in cities, in situations where it is not possible to be self-sustaining and self-sufficient.  Our nation no longer grows enough food to support us, and that which we do grow relies upon mechanical production assistance – that too will have all failed.

So, yes, for sure we’ll see at least a half million people die in the first few minutes and hours after an EMP attack.  But that’s only the very tip of the top of the iceberg – how many more tens/hundreds of millions of people will die in the weeks and months immediately thereafter?

That is the true headline that urgently needs exposing and national discussion.

Now that we have you truly anxious, you can read more about EMP vulnerabilities here.