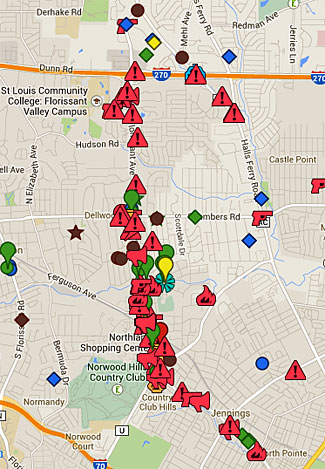 Locations of most of the riot events in St Louis. The original police shooting is on the left, in the middle, in green.

A white police officer in Ferguson, MO (a suburb of St Louis) shot a black youth on Saturday 9 August.  On Sunday, during the day, there were some protests by members of the local community and a vigil.

What happened next was unfortunate, but also educational to us as preppers, and it behooves us to learn the lessons inherent in the events that followed.

(Note :  The riots initially filled Sunday night, Monday night was fairly quiet, and we wrote this piece on Tuesday, thinking the matter was essentially done.  Not so.  There have been continued relevant developments during the week, so after reading this article, please then click to read our follow up piece, written on Saturday, ‘More and Updated Lessons from the St Louis Rioting‘.)

There’s, alas, nothing particularly unique about police shooting black youths (or for that matter, shooting people of any race or age) and neither is there anything surprising about the transformation of youths who were deservedly shot as a result of their own inappropriate actions, now suddenly being beatified and described as saintlike creatures who were victimized and totally innocent of any and all charges.  Normally, people on both sides of the equation go through the ritualistic utterances that these events require, and then life goes back to normal, sadly with nothing changed.

But the unpredictable and unforeseeable lottery of life threw out a joker this time.  Sunday evening and night saw rioting and looting break out in the broader area around Ferguson, with the lawless perpetrators quite unashamedly and aggressively justifying their actions.  As is invariably the case there was no logic to the wanton gratuitous destruction – for example, in this article there is a video clip of a couple of rioters attempting to smash a bus shelter.  A bus shelter?  The destruction of public transport facilities disadvantages the very social sector of society that is rioting, not the vague aspects of society they feel they are protesting about and against.

But who ever said that logic or sense needs to apply to such actions?  Although, and please understand this, the rioters and looters actually think what they are doing is both sensible and appropriate!  This article quotes one person as saying

This is exactly what is supposed to be happening when an injustice is happening in your community.  You have kids getting killed for nothing.  I don’t think it’s over honestly, I just think they got a taste of what fighting back means.

There’s so much to disagree with in those three sentences.  How does a police action against someone justify someone else, somewhere else, looting another person’s store?

And that’s actually the first lesson for us as preppers.  We can not judge people and predict their actions based on our own standards of common-sense, rationality, fairness and justice.  Here’s something to live by (the closing line of this excellent article on a very different subject) :

What you find utterly unthinkable may prove quite thinkable, even reasonable, to your enemies.

One of the problems of the west in general, the US more specifically, and the people around us in particular is that they expect the people, groups, and nations they deal with to act predictably, sensibly, and in a manner and adhering to values similar to themselves.  We’ve two words to offer anyone who thinks they should predict how other people will act and behave based on their own values :  suicide bomber.

But, right here in the US, just a couple of nights ago, hundreds – possibly thousands – of our fellow citizens gleefully set about doing exactly these things, and feel totally justified in what they were doing.

So, please consider this.  If these people feel entitled and empowered to loot stores with this ‘justification’, how do you think they’ll feel in any sort of broader breakdown of society?  Do you think they’ll hesitate, for a country moment, to loot not just stores, but then to turn their attentions to ordinary people in their ordinary residences, and continue their gratuitous looting without pause?

Even worse, when the food runs out, what will they do then?  Won’t they feel doubly empowered and justified to take by destructive force any food they can find from anyone?  Indeed, isn’t it likely they’ll come up with some more pseudo-justification as to why what they are doing is perfectly moral and correct?

One last part of this second point.  Don’t you think that as social order progressively breaks down, the initial core of looters and rioters will quickly be joined by more and more people?

As seems to typically be the case, when the rioting and looting broke out, the lawless groups went after the easy pickings.  Sure, we got to see examples of armed local business owners protecting their businesses, but there’s another aspect of this that is worth considering as well.

This report is very interesting.  It tells how 10 – 15 cars with nearly 30 people pulled in to a strip mall, and the people then set about smashing into a shoe store and looting it.  Right next to the shoe store was a Radio Shack, and you just know that the electronics in a Radio Shack would be ultra-tempting to the looters.

But there was a single security guard at the Radio Shack, and his presence was enough to deter the 30 looters.  Like all bullies, they are essentially cowards.  When someone stands up to them, they usually slip away rather than confront a determined opponent.

We suggest that the one security guard was very fortunate in this case, and wouldn’t count on one person consistently being able to turn away 30.  But probably you don’t need to have 30 people on your side to defend against 30 attackers, because only one or two of the attackers will be seriously motivated.  The rest of the people will be ‘going with the flow’ and believing that they can do so with impunity as part of a larger group.  As soon as their safety is directly threatened, their enthusiasm will fade.

Early in the evening gunshots were heard near the gas station sending crowds of protesters screaming and running away.

We think that proves our point!  It seems no-one was shot, and we’re guessing that some people defending their business simply brandished their weapons and fired a few rounds in the air.

We are not sure that this would be all you need to do in a truly dire situation with all of society crumbling around you, but in this lesser scenario, it was obviously more than sufficient.

So our derivative point and third lesson is that you should group together with your neighbors, at work and at home, to have at least a small group of people to back you up and create a more credible defense when confronted by rioters.

Our next point and the fourth lesson is that this rioting was entirely unexpected.  It came out of nowhere and erupted like wildfire in a seemingly unpredictable manner.

But although it was unexpected and unpredictable to the victims, that is not to say that it wasn’t also planned by the rioters.  For example, think about the implications of the 10 – 15 carloads of rioters that drove to the shoe store and Radio Shack.  There was nothing spontaneous about that.  Those 30 people got together and carefully coordinated making a special journey to those two stores.  See our earlier article about flash mobs and social media for more discussion on this growing phenomenon.

So don’t underestimate your adversaries.  Although on the surface, rioting looks spontaneous and haphazard, underneath there is a mix of the truly spontaneous but also darker forces eagerly seeking a ‘free ride’ and exploiting and aggravating the situation as best they can.

Our last point and fifth lesson is that the geographic locations of the rioting and looting is not necessarily directly related to the location of the trigger event.  Rioters and looters can travel to targets of opportunity, as long as they feel that the umbrella protection of the rioting/looting will protect them.

The two maps in this article are interesting.  They show the spread of riot related events, some far out of the local community.  Just because you might think you live in a ‘good’ or ‘safe’ area, in terms of the demographic makeup of your community and local crime levels, does not mean that it will remain good or safe when rioting breaks out in the region.

1.  Don’t judge and anticipate other people’s actions based on your own views and values.  Other people will act unexpectedly and irrationally, in ways that can potentially be enormously harmful to yourself, your family, and your possessions.

2.  In an adverse scenario with normal social order disrupted, other people will feel justified in taking everything from you, including definitely your dignity and quite possibly your life, even though there is no possible logic to this.  Do not expect a breakdown in society to bring out the best in everyone.  It will bring out the worst in sufficient numbers of people as to pose major problems.

3.  If you actively protect your property and yourselves, you’re likely to deter all but the most determined or desperate of looters during the early stages of any civil breakdown.  Later on, when looters are no longer motivated only by greed, but instead by fear and the need for survival, the situation will become more extreme.

4.  We never know when rioting might suddenly break out.  The trigger events and the degree of response can be unexpected and disproportionate.  But don’t underestimate the rioters.  They include organized gangs of roving opportunists who are coordinating and communicating among themselves to plan their actions.

5.  Rioting can spread through a region, and reach into unrelated communities, because the rioters aren’t only on foot.  They have cars, too.  When a metro area becomes infected by rioting somewhere, the entire metro area becomes at risk.

And, lastly, at the risk of stating the obvious, a bonus sixth point.  When things go seriously wrong, you can not count on the police being there to protect you or your belongings.  It truly will be every man for himself, and every small neighborhood watch group or strip mall business owners association for themselves.

Further to this article, written on Tuesday (the rioting started on Sunday night) we have added a second article on Saturday.  Please now go read More and Updated Lessons from the St Louis Rioting.