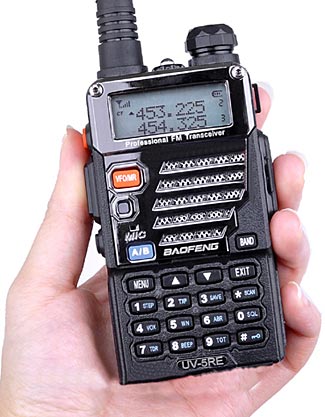 The Baofeng series of radios – our recommended best choice for most prepping purposes.

The General Mobile Radio Service – or GMRS for short – has evolved since its original establishment in quite different form in the 1960s.  In 1987 it evolved to essentially its present form, with business use specifically excluded, with a set of eight channel pairs for repeater operation, and seven single channels for non-repeater ‘simplex’ operation.

In 1996 the FCC created a new product – the Family Radio Service or FRS for short.  This was sort of ‘GMRS-lite’ and almost literally was squeezed into the ‘gaps’ between GMRS channels.  It was designed as a low power service for handheld walkie-talkie type radios only, and unlike GMRS there was no licensing requirement.  Anyone could buy FRS radios and ‘play’ with them more or less as they wished.

Because the FRS and GMRS frequencies were sometimes the same and sometimes only very slightly different, radio manufacturers started selling dual-purpose radios that could work either as FRS or GMRS radios.  In theory, this was illegal, but in practice, it was so widespread that the FCC chose to do nothing.  This created a confusing mix of frequencies and channel numbers, and we previously explained the implications of this in our earlier article explaining the confusion of frequencies between FRS and GMRS.

Finally – 21 years after this all started to become a mess, the FCC has acted to try and clear things up, publishing new rules and frequencies in September 2017, taking effect from late October 2017.

Unfortunately, things are still far from clear, but they are perhaps slightly less messy than before.  In particular, there will soon no longer be any more dual purpose radios – something we discuss in our article explaining the changes in FCC regulations about FRS and GMRS radios.

Here now is the new improved official list of channels and an explanation of what each channel can be used for.

Let’s first look at the most relevant list of channels for many of us – the FRS channels.

Note that all FRS channels require a radio with NFM – ie, 12.5 kHz bandwidth.  And, as you can see, the numbering of the channels seems somewhat illogical and out of sequence with the order of the frequencies, as does the different power requirement for the 467 MHz frequencies.

In the case of GMRS, not only do we show the frequencies and power, we also show what types of GMRS radio can use each frequency, and explain the frequency pairs for repeater use.  On the other hand, there are no official channel numbers.  Yes, it is quite a lot messier than the simple table above.

As you can sort of see from this table there are several differences between the GMRS and FRS services.  Although the FRS channels 8 – 14 are essentially identical with both services, the FRS channels 1 – 7 are restricted to 2 watts whereas the same GMRS channels allow 5 watts, and the channels 15 – 22 can go up to 50 watts with GMRS service but only 2 watts with FRS.

Plus FRS radios are limited to small handheld radios with fixed antennas, whereas the GMRS radios can have external antennas and be ‘base’ stations with greater power and/or repeaters.

In the power column, we show power of 50/15 for some frequencies.  In these cases 50W can be used for mobile, base and repeater radios, but only 15 watts for fixed stations.

So what are these different types of radios?  In the usage column we list them as :

B :  A Base radio station – a station located at a fixed location that communicates with other base and mobile stations

C :  A Control radio station – a base station that communicates through repeaters and can control the repeater

C* :  A Control radio station transmitting through a repeater

F :  A Fixed radio station – a base station that only communicates with other fixed stations

M :  A Mobile radio station (ie in a vehicle)

M* :  A Mobile radio station transmitting through a repeater

R :  A Repeater radio station – ie one that receives (in this case) on one of the 467 MHz 50 watt channels and automatically/simultaneously retransmits it on the 50W channel that is 5 MHz lower (ie the matching 462 MHz channel)

Note – these definitions are per the FCC Part 95 regulations and seem a bit strange.  On the face of it, it seems that handheld units can’t communicate via repeaters, but we suspect this is not actually the case.

The key difference between the GMRS and FRS frequencies is there are an added 8 GMRS frequencies that are intended to be used only for repeater inputs (in the 467 MHz range).

Otherwise, the frequencies are the same, but power levels are different, and also in the high power channels, GMRS can use wideband FM as well as narrowband FM.

Most of these differences are automatically taken care of in the radio sets themselves.

The strange mix of frequencies sort of makes sense with this graphic illustration published by the FCC. 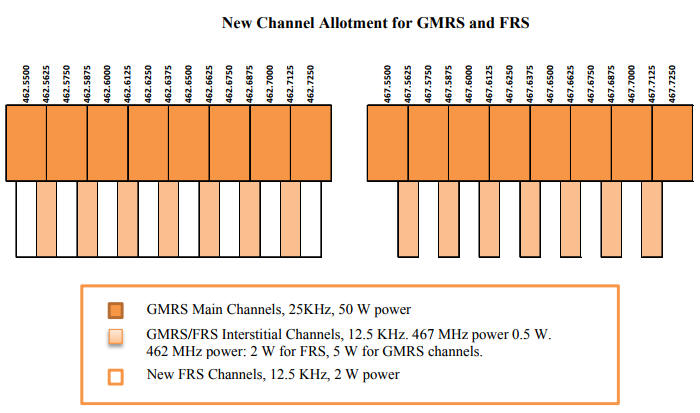 It is possible the FCC may now start to lightly enforce some of its rules for the FRS and GMRS bands, so it would be wise to generally comply with the new requirements, now they are in effect.

Lastly, and as mentioned in the other article about the 2017 FCC changes to FRS and GMRS, you might prudently choose to get some more Baofeng or similar multi-purpose radios prior to their probable banning, early in 2019.