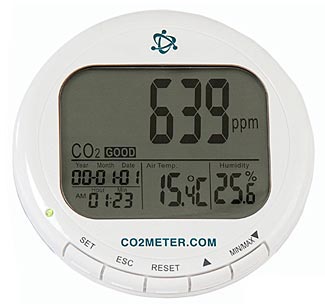 Carbon dioxide (pictured) and monoxide meters are an important safety precaution if you plan on having any type of fires indoors.

So there you are, all hunkered down in your retreat.  The temperature is below freezing outside, but you’re happy and warm inside, both because your dwelling is ultra-insulated and also because you’ve a nice low-tech fire burning in the fireplace, providing a warm cheery ambiance and keeping you all nice and toasty.

That’s a nice mental image, isn’t it.  And if you have an open fire in an open fireplace, you’re probably okay, but many people – especially less well prepared people – when they find themselves encountering a situation where their normal source of heat fails, may resort to emergency methods of keeping warm that invariably end up with burning something in a way that isn’t a typical part of their normal living.

The problem is that if you have a fire in an enclosed area, what happens to the products of the fire’s combustion?  The smoke and toxic gases, carbon monoxide (CO) and carbon dioxide (CO2)?  If they have nowhere to go, or aren’t being vented at the same rate they are being produced, you will start to get accumulations of these products.  And that can be a bad thing.

About Carbon Monoxide and Carbon Dioxide

People naturally produce CO2 as an output gas from breathing (assuming we breathe in air with almost no CO2  present then about 4% – 5% of the gas we breathe out is CO2), so any type of enclosed space with people in it starts to have elevated levels of CO2, no matter if there are any fires in the room or not.  The smaller the space, the greater the number of people, and the less the amount of fresh air that flows into the space and the less the amount of stale air that flows out, the higher the CO2 level may become.  Normal buildings typically have anywhere from maybe 1500 – 5000 parts per million of CO2 in them.

So we are fairly tolerant of elevated CO2 levels and the body quickly recovers from an exposure to higher than optimum levels of CO2.

Carbon monoxide is a much deadlier gas.  Normal concentrations of CO in the atmosphere are about 0.1 ppm (measured by volume not weight – CO is slightly lighter than air, whereas CO2 is slightly heavier than air).  In a typical house, concentrations are perhaps in the order of 0.5 – 5.0 ppm.

OSHA says that CO levels should be kept below 50 ppm.

The good news is that the smoke/toxic gases such as you get from a normal open fire (we’ll oversimplify and consider the two as being the same) are readily detected.  When your eyes start to water, and you find yourself coughing, you know you’ve a ventilation problem, and you’ll be forced to do something to solve the problem.

But what say you are using a clean burning heat source such as a kerosene heater or even just running all the burners on your gas stove full on?  Then there are few or no smoke/toxic gas byproducts that you can readily detect, but the fire is still creating CO and CO2.  It has to – all fires create CO2 and most fires also create CO to a varying extent.  The better fed with oxygen the fire, the less CO; the more oxygen starved, the more CO.

Both of these gases are impossible for us to detect.  They are clear, tasteless and odorless, and cause no irritation on our skin or in our lungs.  They are silent but deadly killers.

The good news is that there are inexpensive and effective detectors for carbon monoxide.

The bad news is that carbon dioxide detectors are more expensive.  However, as a rule of thumb, if the smell of the burning fire becomes objectionable, then you need to do something about that for all reasons, including concern about possible CO2 buildup.  Many people choose not to worry about CO2 levels at all, and certainly our advice to you is to have a carbon monoxide detection/alarm system operational as the higher priority (and regular smoke detectors simply to detect fires as a safety measure too).

.  Your local hardware store probably has them on the shelf, too, although probably not in quite such a wide range of makes and models.

It is much more difficult to find carbon dioxide detectors, and a Google search typically brings up only carbon monoxide detectors.  This difficulty is made even worse by the propensity for some people to confuse the two gases, and so even when people talk about CO2 detectors maybe they actually mean CO detectors.

Here is one website that clearly does sell CO2 detectors.

Oh – one more important thing.  When buying CO and CO2 detectors, be sure to get ones which are battery-powered.  They won’t be much use to you otherwise, because in an emergency where you need to resort to alternative heating strategies, this almost surely means that you’ve also lost mains power.

Note that smoke detectors do not detect either carbon monoxide or carbon dioxide.  Although there are two different types of smoke detectors (ionization and photo-electric) both work by detecting particulate matter rather than gas.  They are simply – as their name implies – devices that detect smoke, rather than specific gases or even heat concentrations.

There are some combo units that combine a smoke detector and a CO detector too, but you should not assume your smoke detector also detects CO – and being as how that makes it more expensive, if it doesn’t say it does, then it probably doesn’t.

If there is any expectation that you’ll be burning fuel indoors, it is prudent to have carbon monoxide detectors to monitor the CO levels that will build up from the fire.  Modern super-insulated buildings ‘leak’ less air, and so can trap CO much more readily than older drafty structures.  It is prudent to insulate your retreat and regular dwelling as much as possible to save on energy, both normally and in a crisis, and when you do this, it becomes prudent to add a carbon monoxide detector too.

Carbon dioxide is much less deadly than carbon monoxide, so adding a CO2 detector is less essential, but still good practice.