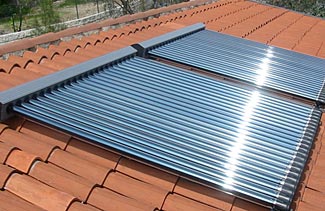 Using solar water heating brings two benefits – greater efficiency and an easy way to store energy as hot water for later use when the sun goes down.

This is the final part of a four-part article series about how to store electricity (better thought of as storing energy rather than electricity per se).  If you arrived directly here from a link or search engine, you might wish to start from the first part of the series here, then read on sequentially through the balance of the series.

So it is better to time-shift as much as possible to times when you have spare electricity.  One example of a time-shiftable process would be washing clothes and dishes (assuming you still will use an electric dishwasher in the future, which is unlikely).

With these types of activities, you can wait until a day with lots of electricity coming from the PV cells or wind turbine before washing your clothes (and/or dishes).

If you have an electric range, you should use it to cook food during times of peak electricity production.  Maybe you’ll change your eating habits and have your main meal of the day in the middle of the day (something many societies already do and which many health experts think to be a better approach to eating) so that the cooking energy is sourced when the sun is shining brightly or the wind blowing strongly.

If you are vacuuming, do that when there’s spare electricity, and never when you’re using stored electricity.  There’s almost never an emergency requiring urgent vacuuming in the middle of the night!

Try and match your own sleep and wake times to the sun.  If you’re sleeping during the morning with daylight flooding in to the retreat, but then staying up late at night, using electricity to power lights and possibly heating too, that is more wasteful than using the sun for light as much as possible, and sleeping in a warm bed during the coldest part of the night.

Take your shower/bath in the morning if possible so as to allow the system all day to reheat the water.  Or, alternatively, after using hot water at night, don’t use stored electricity to heat up the replacement water, and instead wait until the morning to do that.

Which leads to another strategy.

An easy and low tech type of storage is to store heating or cooling energy.  There are special ‘storage’ heaters that will run when you have spare electricity and heat maybe a large vat of oil or even a block of concrete, then at night, you expose this heat source and allow the heat to transfer out and into the surrounding areas of your retreat.

You can also do this for cooling.  When there’s surplus electricity, make large blocks of ice.  Then, when you need extra cooling but no longer have extra electricity, allow the ice to melt, cooling the area around it.

These are low tech but sensible concepts.  Indeed, many large buildings currently use these types of systems for more efficient heating/cooling.  You can do the same.

Replacing Electricity With Other Energy Forms

If you can replace electricity with other forms of energy – forms which may be more abundant, and/or lower tech and more sustainable into the indefinite future – you’ll be doing yourself a favor.

One example of this substitution is to mount a solar water heater on your roof.  That way, instead of using solar energy to create electricity and then the electricity to heat the water, you go directly from the solar energy to the hot water, in a much more productive/efficient process, and also in a lower-tech form.

A solar water heater is easy to construct and easy to maintain.  But as your PV cells fail, you’ll absolutely not be able to repair them yourself, and no-way can you fabricate your own additional solar cells in a low-tech future.

Another example is to use wood (or coal or peat) as a heat source for heating your retreat, your hot water, and possibly even for cooking with as well.

Or, if you’re using propane to power a generator, get a propane rather than electric stove and burn the propane in that stove.  You’ll use less propane to directly power your stove than to first convert it to electricity and then to second convert the electricity to heat on your stove.

How Much Extra Electricity Generation Capacity Do You Need

Remember that the first part of an electricity storage system is having ‘spare’ electricity to store!

Once you’ve done what you can to minimize your reliance on stored electricity, the next question becomes how you will get the electricity to store.

Clearly, you will do this by increasing the capacity of your renewable energy sources so they can simultaneously meet your normal electricity needs and also send extra capacity into the storage system you selected.

And, equally clearly, the electricity source(s) you have must be able to generate enough spare electricity each day to be stored to be used each night.

So you need to consider the answer to this question – ‘assuming a less than fully sunny day, or a day with poor rather than optimum wind, how much power do I need generated for the day’s requirements and to recharge for the night ahead as well?’.

Remember that most solar and wind generators are specified as having a certain capacity on a good/close to optimum day.  You’ll need to adjust the claimed daily capacity to more accurately reflect the real-world rather than best-case probability of electricity it will create for you.  Maybe you need to get a system which is apparently twice the capacity you need, just so that in periods of low generating conditions, it still generates enough for both your immediate and your storage needs too.

Now, for an interesting additional factor.  The greater your storage capacity, the smaller your surplus daily generating capacity needs to be.  This is because the extra storage capacity gives you a greater ability to average out the peaks and troughs of actual daily electricity production.

One more consideration.  Most lead-acid batteries require a certain minimum charge rate in order to effectively charge, so you need to be sure that your electricity source will deliver enough charge to actually load electricity into the battery.  Think of a helicopter – it uses a lot of energy just to hover – you don’t want your battery to just hover, you want its charge level to rise, so you need to provide more than this ‘hovering’ amount of energy to actually raise the battery’s charge.

Whatever you come up with, you must have a system that on an average/ordinary day will provide enough electricity during the day for all the daytime needs in your retreat, plus enough left over to replenish a typical night-time’s consumption of electricity, plus perhaps still more left over to replenish one more typical night-time’s consumption, too.

Electricity Will Never Be Cheaper Than Now

Spending $10,000 for a 5 kW solar array might seem like a lot of money, and of course, by any measure, it is indeed a substantial sum.

But – and you can absolutely trust us on this – in a Level 2 and particularly a Level 3 situation – your future lifestyle and ability to survive will be totally linked to your ability to generate your own energy, particularly in the form of electricity.

So get as much electricity generating capacity now as you can afford.  Particularly if it is modular, it can be either used or traded in the future, and you’ll quickly discover the essential nature of energy in a future Level 2/3 situation.

Read the Rest of the Series

If you’ve not yet read them, you might want to read the first three parts of this series too – Storing Electricity, Using Batteries to Store Electricity and Other Energy Storage Methods.

We also have other articles on the general topic of Energy.

4 Responses to “Strategies to Reduce Your Need to Store Electricity”