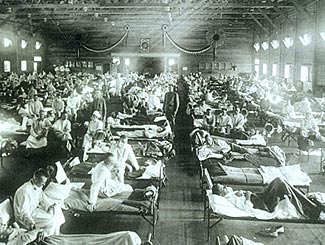 Chaotic scenes in emergency warehouse hospitals during the 1918-20 Flu Pandemic.

A major concern when bugging out is to beat the rush of other people, all seeking to abandon the cities at the same time, such as to make safe efficient travel impossible.  Talking about safe travel, we also wish to bug out before travel becomes actively dangerous, with modern-day highwaymen preying on distressed evacuees.

A not so commonly stated concern, but surely one which must be of equal importance, is beating any travel restrictions that might be imposed on people by county, state and federal authorities.

How likely is it that there would be travel restrictions imposed in an emergency?  Although it would seem that the right to travel is a derivative right from the First Amendment’s right to peaceably assemble (ie anywhere), the reality may be different and there is no end of examples of our rights being trampled on, both in the normal course of day-to-day living, and of course, in special situations which the authorities seem to believe allow them to suspend the Constitution and its protections.

Of course, the reactions by the authorities will vary depending on the emergency, but a new research paper by three researchers at MIT would seem to encourage such travel restrictions, at least in the case of epidemics and other biological type emergencies.

The study shows that even only a moderately contagious disease could see the rate of infection decrease by 50% if the authorities were to restrict where people could travel.  That’s a strong argument in favor of imposing travel restrictions and you can be sure that it has been well received by the people who might wish to act in such a way in the future.

One could even argue that in this particular case, restricting people’s freedom to travel as they wish and choose is a fair and appropriate thing to do for the greater good of everyone, but that’s not going to be very comforting to you, is it, when it prevents you from escaping a disease-ridden city and making it safely to your rural retreat!

Restrictions on travel could be enacted very quickly and with no warning.  A decree, possibly by state governors and almost certainly by the nation’s President, is all that would be required, and of course, the very nature of a travel restriction is that the authorities would not want to give any warning or allow a grace period, because that would encourage and accelerate people’s travel plans.  We saw restrictions on travel and public assembly during the Spanish Flu pandemic of 1918-20, so the precedent is already in place.

It is foreseeable, in any future disruptive emergency, that one of the first things the authorities will attempt to do is ‘freeze in place’ the current situation.  That is understandable, because currently they have a reasonably accurate understanding of population distributions and therefore, the population based issues and needs and potential problems, and if people started moving every which where after an emergency, the authorities would fear they were becoming even less able to adequately and appropriately respond.  It seems only too likely that the authorities will decide that so as to ‘better help us all’, the first thing they should do is limit and restrict our abilities to help ourselves.

The bottom line to those of us with remote retreats?  We need to move there at the first sign of problems.

We talk about this need repeatedly in our series on bugging out, and if you were to read just a single one of our articles, perhaps it should be this one which talks about the difficulties we will have and the delays we will likely create in making the decision to bug out.