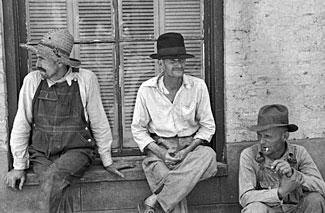 Sharecropping is often associated with poverty and exploitation as implied by this 1935 picture of cotton sharecroppers, but there’s no reason why you can’t create a fair and mutually beneficial agreement to allow third parties as tenants on your retreat acreage.

If you are fortunate, you have managed to secure a reasonably large lot for your retreat, and if you are very fortunate, the chances are your lot will be larger than what you could work yourself in terms of cultivating crops, grazing livestock, and so on, particularly in a future scenario where mechanical productivity aids like tractors are no longer available to help you in your work.

There are plenty of good reasons why you should wish to have a larger-than-you-can-handle lot size.  For example, it allows you to expand the number of people you admit to your retreat, because extra people can productively be put to work to provide food for themselves and extra for everyone else.  It also gives you a geographical buffer against natural disasters and unexpected misfortunes, ranging from fires to floods, infestations, and who knows what all else.  It also gives you a ‘buffer zone’ and some added isolation and security.

If the commonly held views are correct, if/when a major crisis destroys our society, it is likely there’ll be some sort of exodus of people from the cities and from the towns, too.  These people will be looking for land to settle on and live on, and when they see your large spread, they’ll feel entitled to take some ‘fair’ (in their eyes) portion of it for themselves, especially if it is land that is lying fallow and not being actively in production by yourself.

This is not just conjecture or speculation.  We confidently assert that it will happen, because there is plenty of historical precedence for such things – you only have to look back 150 years in our history to see plenty of examples of such things as our own west was settled.

This is the point where some preppers start to mutter darkly about weapons and tactics and all that sort of stuff.  We’re not so sure that’s the best response because there may likely be some downside to you and your family members if you and the other people truly do start trading shots, and in this type of future, with diminished access to any type of healthcare, and the essential role of everyone in your community, such things are likely to be more impactful than they already are now.

If you do this, you’ll be reliving the range ‘wars’ and recreating the tensions between the cattle barons and the homesteaders in the late 1800s during our country’s ‘cowboy’ era, and such altercations seldom brought any good to any of the people involved.

There’s another consideration, as well.  If you choose to aggressively defend your land, it will be something you will need to do on an ongoing basis.  Some people will appear today, and after you beat them off, another group might appear tomorrow or next week.  You will need to win every one of these ‘battles’, and hopefully to do so bloodlessly too.  Sooner or later, you’ll find you’ll lose rather than win.  To be realistic rather than defeatist, you can’t fight against all 330 million of your fellow Americans (or even the massively smaller percentage who will actually come to your land).

If you have land that is not being used to best purpose at present, why not cooperate with such people and strive to create a win-win arrangement for you and them.  Why not encourage them to settle, and even help them get established.

If you do this, you populate your land and change the dynamic for future encounters – it is no longer a case of you being seen to be selfishly keeping to yourself more land than you can possibly need or use, but instead, it will be land that is being fully developed by people living on the land, which changes the moral equation from a dubious situation to one where you clearly hold the high ground, should other opportunists come along and seek to displace you and the people also sharing your land with you.

Now for the best part of all.  By bringing more people onto your land, you are creating a stronger, more robust and resilient community, and likely with a larger pool of talents and skills.  Furthermore, when you allow these people to start working parts of your land, you don’t just let them do this for free.  You of course charge them a ‘rental’ for the use of your land, and possibly for the use of your tools and other resources and facilities, and for seed, and so on.

Do we need to stress that any ‘rental’ that you charge must be fair, and must allow the people on your land to benefit as well as you.  If you get too greedy, you’ll change the dynamic from ‘win-win’ cooperation to a ‘win-lose’ confrontation that is counter-productive.  Think of it like a tax – we might grumble a bit, but we don’t mind paying a minimal tax when we can see fair value in return for it, but if we were to be slapped with a 90% tax, then many people in such cases feel completely justified in lying and cheating to avoid the tax, and/or will simply not work as hard because they see nearly all their earnings going to the government rather than flowing through to themselves.

Models for Sharing Your Land

There is nothing new about the concept of allowing other people to work part of your land.  For centuries, societies have had various arrangements, from feudal systems in the middle ages, through clan/crofting systems, to much more modern share-cropping, tenant farming, and farming cooperative arrangements.

Some people criticize some of these arrangements, and indeed, some can be validly criticized.  But the criticism should be understood as applying more to the specific allocations and shares rather than to the underlying methodology.  For example, something that might be fair on a 25/75 split might be grossly unfair if all the details were the same except for the split being changed to 75/25.

From your perspective, if you have land that you aren’t using and won’t be using, any sort of return on that land becomes a bonus, and apart from wanting to ensure you get a fair share, there is no need to drive too hard a bargain, particularly in view of the other benefits of growing your local support community.

The return you should expect also depends on what you are doing and how you are helping your new ‘tenants’.  If you simply allow them the use of your land and do nothing else, then a small share of whatever they produce is all you can fairly expect – maybe in the order of 10%.  But if you also provide housing, and if you give them a start by providing them some livestock or seed, and maybe you also provide them with tools and productivity enhancements, and perhaps you also provide some expertise and assistance in how to develop the land, and if you also provide them food until such time as they start to become self-supporting, then each of these value-adds on your part can be fairly reflected in a larger share of the outputs they create.

Needless to say, you should never create a scenario where it is impossible for your tenants to be self-supporting.  You don’t want to create too vast a wealth-inequality as between you and your tenants.  If you are enjoying huge feasts while they’re struggling to put any food on their table at all, that’s a recipe for a tenant uprising, and you truly don’t want that.

In centuries past, exploitive share-cropping arrangements survived because there was no precedent for other arrangements, and because all the power was controlled by the owners rather than by the tenants.  It took a very long time and much evolution of social values for the appallingly exploitive and unfair former arrangements to eventually die out.  We do not feel it would be easy or appropriate to seek a return to such times, because these days, everyone has much more egalitarian expectations for their personal wealth and well-being.

We urge you to be fair to the point of being generous with any such tenancy agreements you enter into.  There is truly not a lot of ‘cost’ to you in allowing your under-utilized land to be better utilized, and there’s an enormous amount of upside if you do so on a win-win basis that fairly rewards the tenant and encourages them to truly ‘treat the land as if it were their own’.

Some Suggested Issues to Record in an Agreement

We would suggest that you record your tenancy agreements formally, in writing, and in as rigorous and extensive a form as possible.  This is simply common sense and gives both you and your future tenant some certainty and protection.

We are not attorneys, and you probably should get a standard agreement blank formally drawn up by an attorney, in advance of any problems, and then use it for all tenancies that might come your way in the future, simply filling in the specific gaps and adjusting the provisions to suit each unique scenario.  So, not to give legal advice, but merely to provide some talking points and suggestions to consider when you discuss this with your attorney, an agreement should cover issues such as :

It truly is a win-win, and so much so that you might choose to anticipate such an occurrence by adding some extra structures on parts of your land that would be suitable for such tenancies.